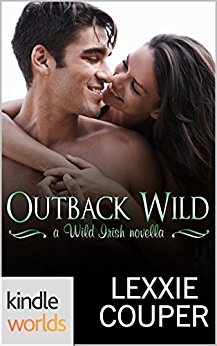 Baz Kerrigan is traveling the world, tying up loose ends for his uncle—the man who raised him and the only family he’s got. A guy from a small Outback town, Baz is ready to cut loose, knowing any moment he’ll be required to take over the running of the pub his uncle owns. No strings. All fun. That’s Baz’s current life philosophy.

But then he walks into an Irish pub in Baltimore, and everything changes.

Hayley Miller loves Pat’s Pub. It’s like a second home for her, and not just because her cousin, Natalie, married into the Collins family. The people she meets in Pat’s Pub are amazing, and as a journalist intern, Hayley is very much about meeting and observing people. She’s not prepared however, for her reaction to the Aussie cowboy who’s in the pub, looking for Nat.

Hayley’s never been a fan of one-night stands, but she’ll happily make an exception for Baz Kerrigan.