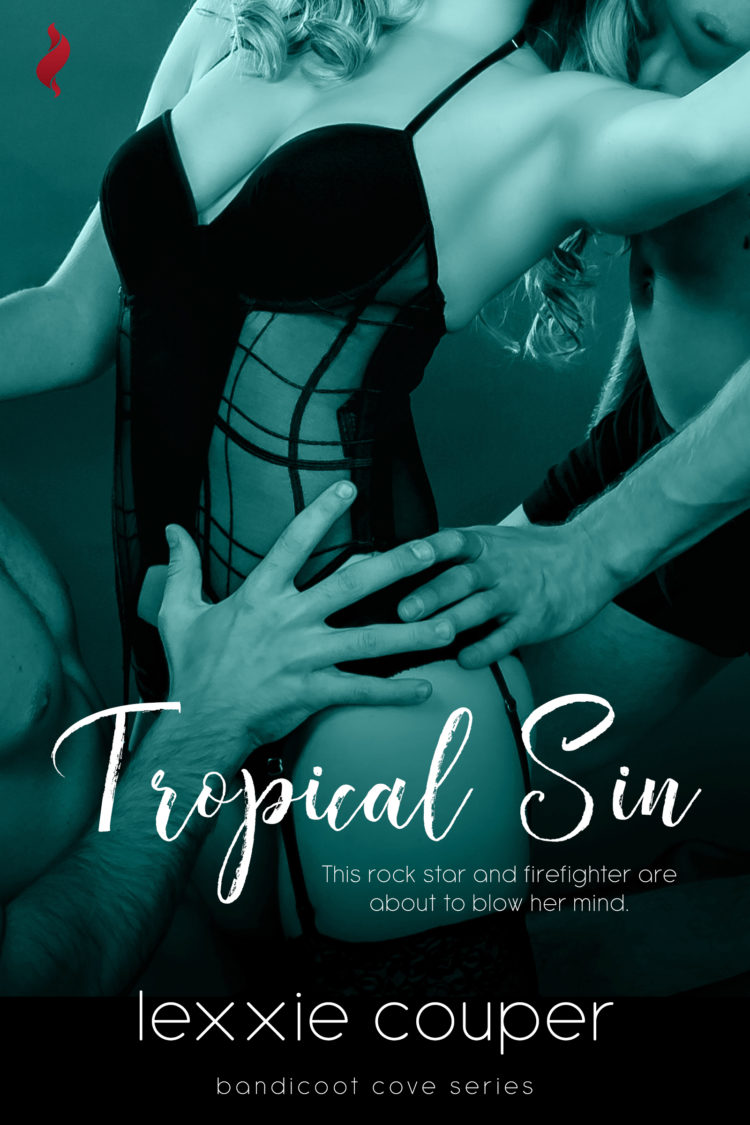 This rock star and firefighter are about to blow her mind

Infamous Nick Blackthorn is looking forward to some downtime as he goes incognito at the sinfully exotic Bandicoot Cove Resort. He’s no stranger to the hedonistic lifestyle of sex, drugs, and rock and roll, but he’s a little surprised to be instantly drawn to a couple so sexy all he can think about is the three of them…together.

McKenzie Wood needs her BFF to pose as her partner at an island resort as part of her cover while she’s chasing a hot story. Luckily, pulse-poundingly gorgeous firefighter Aiden Rogers is always up to any challenge.

No one would believe Aiden can face down any fire but can’t tell his best friend he’s in love with her and would like to do some seriously sinful things to her. When she asks him to go away with her, it seems like the perfect opportunity to change the status quo.

Nick Blackthorne weaved his way through the smattering of guests milling around the Bandicoot Resort’s massive reception area, a small smile curling at the corners of his mouth. It wasn’t the fact he was here, at the soft opening of the resort, that made him happy, nor the fact he was walking around without a minder or bodyguard or groupie to be seen. It was simply because the woman laughing behind him had a delightfully throaty, infectious laugh.

He stopped himself from shooting a look over his shoulder, concentrating instead on finding the correct passageway that would lead him to the Oasis Bar. He was a touch jetlagged and needed something more than coffee to wake up.

A touch? You’ve been on one plane or the other for the last three days. You’re more than jetlagged, you’re jet-freaking-dragged-through-the-turbines stoned. Besides, the need for something more than caffeine has nothing to do with jetlag. You just want to sit out in the sun and pretend you’re a normal person for a short while, don’t you?

He smiled wider. The truth was always less sensational. It had been a long time since he’d been able to sit at a bar and relax. When his agent had offered him the chance to attend the resort’s soft opening he’d jumped at it. Minimum number of guests, all hand-picked by the hotel’s manager, all—Frankie assured him—too discreet or important in their own rights to worry about him being in their presence. A nice change from where he’d just been, that was for sure.

The thought made his smile falter. A little. He wasn’t going to let his mind turn to where he’d just been. Not when he was walking through Eden.

Ah, so the romantic you used to be is still buried in that craven pit you call a soul, is he?

Behind him the woman laughed again, another low, throaty chuckle and, before he could help himself, Nick turned.

She was only a few feet behind, grinning up at a guy almost half again her height, her long, strawberry blonde hair a flaming halo in the sun’s warm rays, her pink lips stretched in a grin that said very clearly, “Yes, I am completely in charge of this situation.”

Nick let his gaze flick to her companion, noting with an experienced eye the man’s latent strength in his six-foot-plus form, his fluid, steady movements, and his utter adoration for the woman gripping his arm.

Christ, they were a sexy couple. Damn sexy.

He scowled, turning away from the young lovers. There was a time he’d have walked straight on up to them and suggested something far more depraved than either could probably imagine. Something very dirty and very enjoyable. That time had passed, however.

The woman laughed again, the delicious sound accompanied by a lower, deeper chuckle. The guy’s laugh. Relaxed. Easygoing. Coming up from his chest to slip past his lips in a humored rumble. Equally as infectious as hers.

He drove his nails into his palms and scanned the lush gardens on the other side of the glass wall. Where the hell was this bar? Somewhere outside beside a pool? He needed a drink.

A face of an angel with filth on her mind,

I pray to burn in her fire,

I pray to die in her arms.

The words—lyrics of a song he hadn’t written yet—whispered through Nick’s head and he raised his eyebrows, his heartbeat quickening. Just as it had been too long since he could relax in public, it had been even longer since words of music came to him. Whoever the redhead was, she stirred something in him.

Yet the arms of her lover reach out for more.

Like a sinner I will burn in his fire,

I will die in his fire as she pleads for more.

Nick came to a halt, the unexpected lyrics floating through his head. It seemed they’d both stirred something in him he hadn’t felt for a long time, not just the woman.

The whisper of a rhythm teased him and he closed his eyes, a familiar sensation stirring in the pit of his gut. Carnal thoughts and lyrics? Coming to Bandicoot Cove really was a good—

“Excuse me, but can I ask you a question?”

The soft, husky voice speaking beside him could only belong to one person. Opening his eyes, Nick turned around, leaving his sunglasses firmly in place as he fixed his gaze on the flame-haired woman smiling up at him. This close she wasn’t just sexy, she was stunning. Stunning and gorgeous. As was the man standing next to her, his expression unreadable, that sleeping strength radiating from him in waves of…

Like a sinner I will burn in his fire,

I will die in his fire and beg her for—

The woman’s question took Nick by jarring surprise. It shouldn’t have, but with the words of a hidden song taunting him and the unexpected lick of sexual interest teasing him, he wasn’t prepared. Especially for what she said next.

“I’m McKenzie Wood from Goss Weekly.” Her clear blue eyes turned direct. Intent. “I’m wondering if you’d like to comment on your stay at the Vergnügen sex clinic in Germany?”