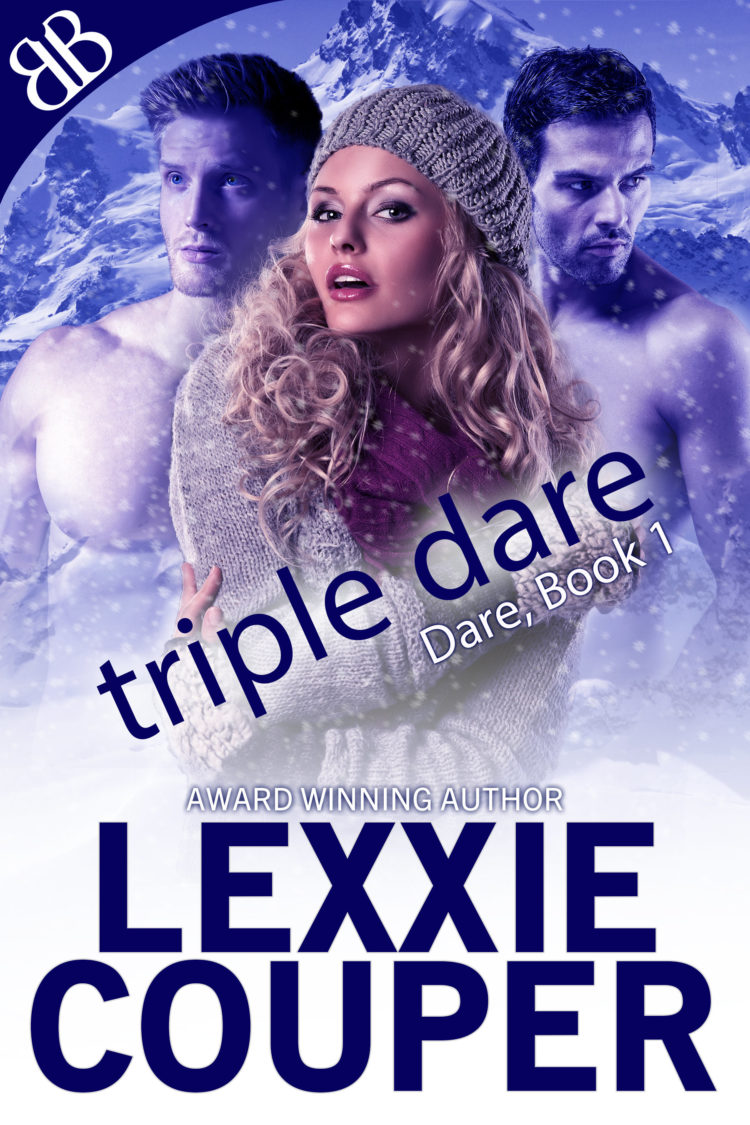 Serious and determined, Joseph Hudson isn’t Australia’s businessman of the year for nothing. So now he’s asking himself, how did he get lost on the side of a mountain in the Colorado Rockies—in the middle of winter—with night fast approaching? Three simple words. I dare you.

Fear isn’t in Rob Thorton’s vocabulary. Life is for the taking, and Rob uses both hands. Challenging his best mate to take an impromptu snowboarding trip to the U.S. is just the latest in a lifetime of dares. Besides, he has an ulterior motive for the trip. And a plan…

Park Ranger Anna McCarthy knows what trouble looks like, and it’s written all over the two Aussies she first encounters in the ski lodge. Instinct has her following them onto the mountain, and sure enough, they end up needing her winter survival expertise. But not even her skills can stop her body from responding to the sexy muscles she finds beneath their ski suits.

Stuck in a remote cabin until the storm passes, the temperatures rise until all bets are off. And a double dare turns into a triple threat—to their hearts.

“What the hell do you two morons think you’re doing?”

They spun to stare at her, their faces—flushed by the icy chill on the air—registered their shock.

Before they could say anything, she poked a finger at them, her stock dangling from her wrist to bang against her right knee. “Do you have any idea how dangerous what you are doing is? How stupid?”

The tall one—Joseph—gaped at her, his eyes locked on her face. “Err…”

“What my mate means to say—” Rob/Bob began, that evil dimple she’d seen last night flashing into existence on his right cheek.

The statement, falling from Joseph’s lips in a hurried jumble of accented words, seemed to surprise him. He blinked. And his friend burst out laughing. “Bloody hell, Hudo.” Rob/Bob smacked a fist into his friend’s shoulder, blue eyes twinkling. “It’s a good thing you’re loaded.”

Anna frowned at them both. She had no idea what Rob/Bob had just said—loaded? Surely Joseph wasn’t drunk on the mountain?—but whatever it was, it made Joseph glare at him. “Put a sock in it, Thorton,” he growled.

Hudo? Thorton? Singing when they should be scared stiff they were going to freeze to death? Laughing in the face of her anger? Who were these people?

Still chuckling, Rob/Bob turned back to her and fixed her with a direct blue stare. “We kinda messed up, thanks to a wonky compass. You wouldn’t happen to know where the number four hut is, would you?”

Keeping a tight grip on her anger, Anna fixed him back with her own level glare. “I do. And if you promise not to sing anymore, I’ll take you there.”

Much to her dismay, Joseph started laughing. Much to her horror, her sex started to flutter. Really quickly. And insistently.

“Any chance we can persuade you to stay overnight with us?” Rob/Bob grinned, dimple still there. “I promise Hudo here won’t sing again.”

“Shut the hell up, Rob,” Joseph growled. “You sing worse than me.”

Anna felt like she was watching a game of tennis. She couldn’t stop moving her stare from one to the other. They couldn’t be for real. She was dreaming this. She’d fallen asleep thinking about how they’d need saving and this is the scenario her psyche had come up with: two gorgeous, sexy-assed Australians asking her to stay overnight in the deserted, unused rescue cabin with them. All three of them locked up together, with nothing to do all night except—

“Shouldn’t we be getting a move on?” Rob’s deep voice, complete with that sinful Australian accent that made her pulse quicken, jerked her out of her confused trance.

She blinked, giving them both another hard stare, hoping like hell her cheeks weren’t as red as she thought they were. “Follow me,” she snarled, snatching at the grips of her stocks and pushing herself away from them. “And try not to get lost.”

For an answer, Rob laughed.

“You’re a fine one to laugh, Thorton,” she heard Joseph say, his accent just as sinful as Rob’s, “you’re the one that got us in this predicament to begin with.”

“And you can thank me later, mate,” Rob replied.

For reasons Anna couldn’t understand, her pulse kicked up a notch. And her sex grew damp.

Oh, Anna. You know where this is leading, don’t you?

She pushed her way through the snow and trees, leading the two men to the rescue cabin on the northwest side of the valley. she had to admit their snowboarding skills were quite impressive. Better than their navigational skills, that was for certain. Much better than their singing skills, even if their accents were sexy as hell. The pit of her belly knotted and she scowled, doing her upmost not to think about staying overnight with them. She didn’t have to stay. None of them did. If she got to the cabin quickly enough, she could contact base and tell them to send up a chopper. They’d be back in the lodge, no doubt singing on tables again, before midnight.

And that’s what you’re going to do, isn’t it? That is, because that’s the right thing to do. The sane thing. Not calling the chopper, not going back down the mountain, that’s the wrong thing to do. Staying overnight in the hut with them, that’s just plain…

The warm, happy sound made Anna’s nipples pinch harder, and she bit back an exasperated groan. God help her, she wasn’t just getting turned on by their accents, she was almost coming thanks to their foolhardy attitude to getting lost.

She titled her hips, preparing to swing around to face them, when Rob swooshed past, his tall, lean body looking deliciously confident on his snowboard. He cut to a halt at the door of the rescue cabin and flashed his dimple at her again. “So,” he said, blue eyes shrouded in shadows cast by the almost sleeping sun, “you going to join us inside?”

Anna narrowed her eyes at him, refusing to acknowledge the eager throb between her thighs. “Do you have any idea how much trouble you two are in? How much this rescue is going to cost you? I can lay charges. I could—”

“Have the best night of your life,” Rob finished with a grin.