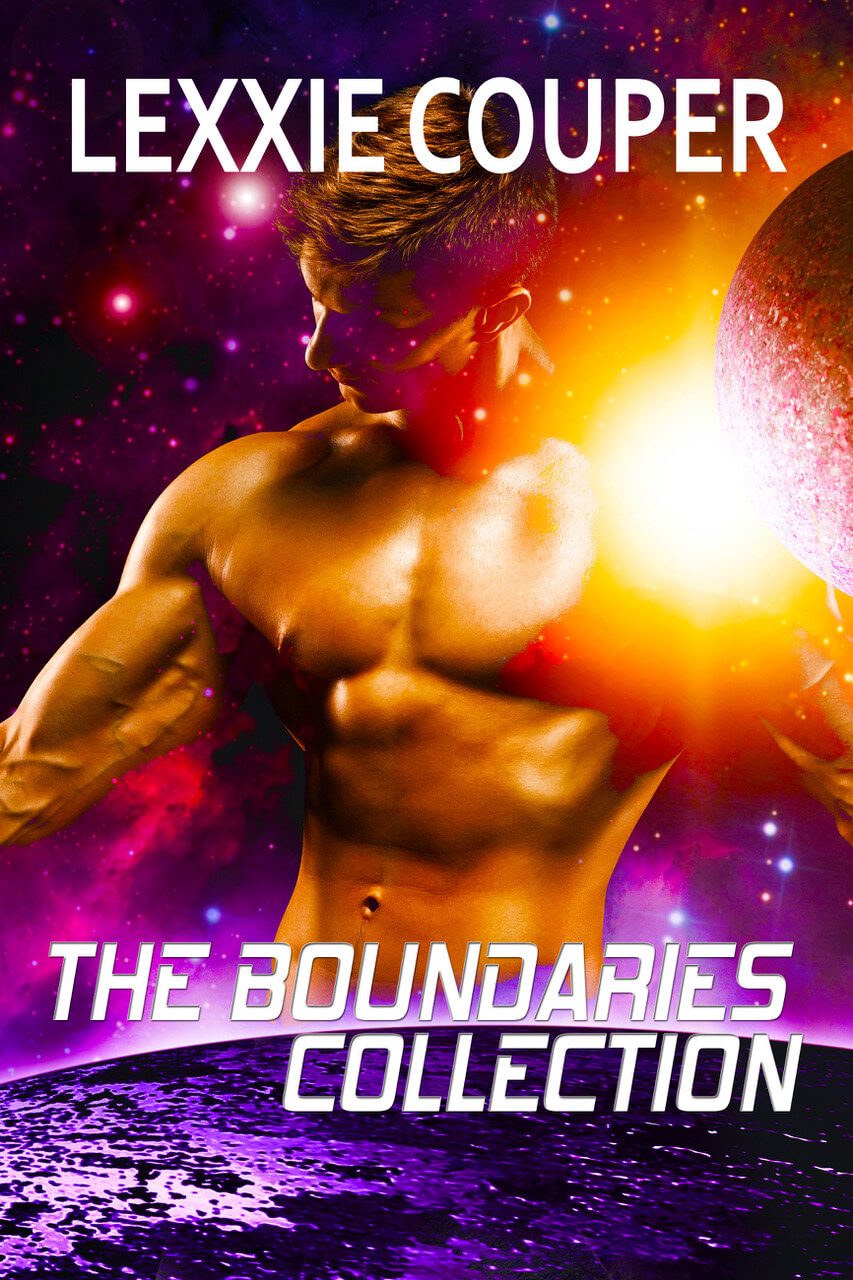 Lexxie Couper’s explosive sci-fi trilogy The Boundaries is now available in one collection. Not for the faint of heart, The Boundaries Collection will take the reader on a scorching, dangerous journey through the darkest places of space…and lust.

Zeric Arctos folded his arms across his broad chest and bit back a low curse, struggling to control his exasperation. His partner hadn’t been able to take his eyes off the beautiful Raavelian slave-girl since she’d entered the Suck and Blow Inn, and now she was walking right past them. Close enough for Jak’s highly attuned sense of smell to pick up the delicate scent of her perfume. He rolled his eyes, shooting his partner a quick look. Oh no, here we go again.

Continue Reading
Jak Thorson was a sucker for Raavelian females. It had something to do, Zeric suspected, with the way they looked, like the gods of sexual torture and pleasure decided to create the perfect woman. Hypnotic violet eyes, smooth tight asses, breasts that filled a man’s hands to perfection, thick wavy hair that shined like spun silk and long, shapely legs that just wouldn’t quit. Zeric moved his gaze to the slave girl walking past them, casting her a slow inspection. This one, well, this one was an excellent example of her species.

A hand slapped at Zeric’s shoulder and he flicked Jak another look, dismayed at what he saw on the Yrathian’s face.

This is not going to end well.

“I think I’m in love,” Jak murmured, tracking the Raavelian’s slow progress past them both.

Zeric turned back to the Suck and Blow’s filthy bar, waving down the droid serving behind it. “You fall in love every hour.”

“Yeah, but this one’s different.” Jak leaned away from the bar, watching the barely-dressed slave thread her way through the rowdy crowd.

Zeric nodded at the droid as it placed a whiskey shot in front of him. “They’re all different, Thorson.”

Jak stuck his elbows on the bar and grinned at Zeric, pale grey eyes glinting with what Zeric could only describe as lust. “Didn’t you see that mouth of hers? Those lips? And those eyes? Gods, Zeric, a man could drown in those eyes! I’ve never seen a Raavelian with green eyes before.”

Zeric let out a slow breath, fighting the urge to cast the slave girl one last look before she disappeared in the crowd. Jak was right. He’d never seen a Raavelian with green eyes either and he had to admit, they were damn striking. He hadn’t missed their unusual power, nor had he missed the soft fullness of the woman’s lips. They were the kind of lips made for kissing.

Jezu, Arctos, you’re getting as bad as Jak.

The disgusted thought made him scowl. When it came to women, his cock left well enough alone. It was safer that way. Unfortunately, when it came to women his partner was ruled by his cock. Thank Jezu Jak’s instincts ruled when they were on duty. Boundary Guardians couldn’t afford to be anything but switched on. If they weren’t, they were dead.

A sharp bang to Zeric’s left made him jump. He snapped his stare to Jak, his hand automatically blurring to his right hip.

Jak stood beside him, his palm flat on the bar’s surface, his grin replaced by a serious frown, the elaborate scars on his cheeks marking his Master Pleasurer status bone white. “I’m going after her,” he said.

Zeric gave his partner a hard look, returning his hand to his glass. It wouldn’t do any good for someone to see him reaching for his gun. Not yet, at least. “No you’re not.” He lifted his drink to his lips. “We’ve got a Bliss dealer to catch, remember.”

Jak let out a sharp sigh. “Yeah, you’re right.” He gave one more lingering look at the Raavelian, watching as she slipped with nimble grace between a group of drunken Ornithions. He returned his attention to Zeric, reluctance written all over his face. “But after we nail this bastard I’m coming back here and taking her away from all this shit.”

Zeric cocked an eyebrow. “And take her where? To The Reaper? A Boundary ship isn’t exactly the place for domestic bliss.”

Jak pulled a face, taking a quick gulp of his own drink, a vile Irithian concoction Zeric wondered how anyone could stomach. “Just ‘cause you’ve decided to be a lonely, miserable bastard for the rest of your life doesn’t mean I have. I don’t plan on being a Boundary Guardian forever, y’know.”

Zeric swallowed the sudden and far too unexpected lump in his throat. He looked at his reflection in the bar’s mirrored wall before turning away, the shadow in his eyes too tormenting. Being a Boundary Guardian forever hadn’t been on his list of planned situations either.

Neither had killing your—

Zeric raised his glass to his mouth, checking out the raucous mob behind him in the bar’s filthy wall mirror. A Xolotlan barged through the crowd, mottled blue skin rippling over his enormous gut, his blunt snout and short tail both twitching nervously.

“Ugly bastard, isn’t he?” Jak said into his own glass.

Zeric unclipped his holster on his hip, freeing his gun for immediate use and straightened from the bar. Focused adrenaline filled his veins. Beside him, Jak seemingly adjusted his jacket, hands flicking briefly over his own weapons. He gave Zeric a slight nod—ready—and they moved into the packed bar, pushing through the unruly drunken patrons as they followed the Xolotlan toward the back rooms.