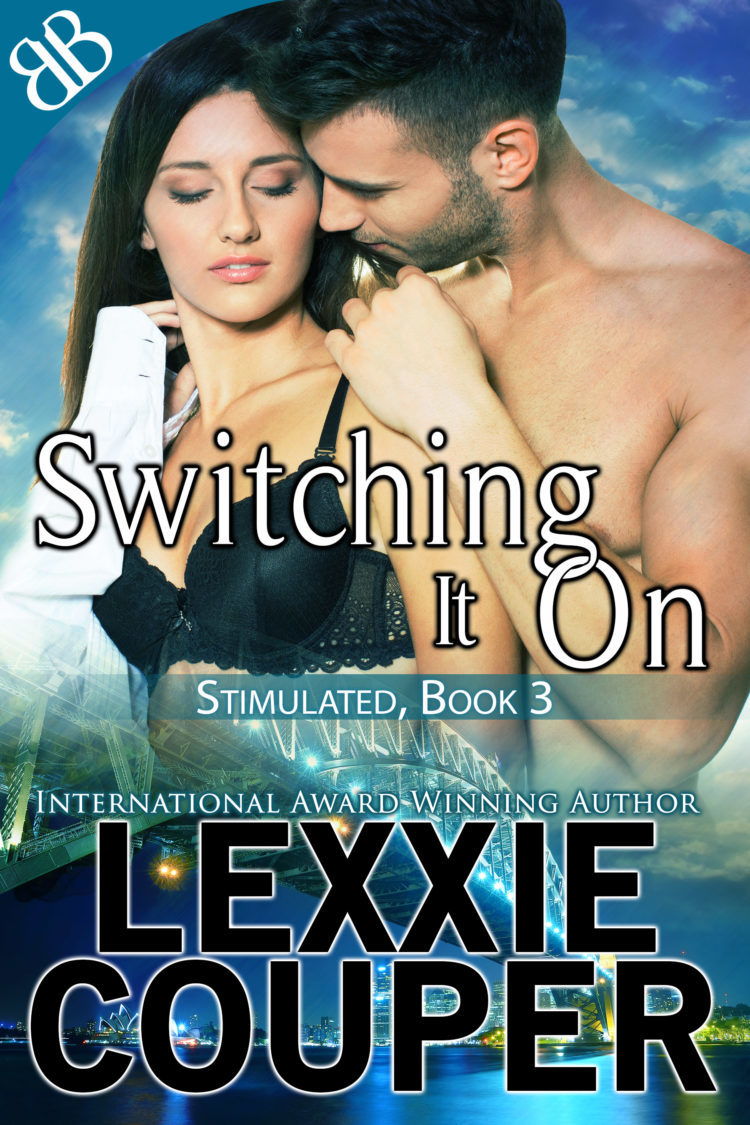 If love were as easy as flipping a switch, the world would be full of happy lovers.

Sports reporter Mike Bailey has been named “Sexiest Man on Television” three years running. His sinful smirk and naughty gaze make women all over Australia swoon. Despite his reputation, Mike was a happily married man, until an obsessed fan tore his world apart. He’s still trying to recover from the heartbreak when he meets the new Executive Producer of his news program.

The second Lena Wilde lays eyes on Mike it all comes flooding back. What it was like to be in his arms, in his heart…and in his bed. But she knows as well as Mike that scorching sexual chemistry isn’t enough to shore up a marriage. If they are going to rebuild what was shattered all their secrets will have to come out. But can Lena and Mike’s rekindling relationship survive the painful truth?

“They say she’s a real ball-buster.”

Returning his attention to the woman currently crossing the conference room on legs any hot-blooded male would give his left nut to feel wrapped around his hips, Mike felt a familiar knot twist in his gut.

It seemed he wasn’t as prepared for Lena Wilkes to be back in his life as he’d hoped.

“I heard,” Julian continued, his voice the epitome of a conspirator’s whisper, “she fired the main cameraman on her old news program the day after his wife was told she had cancer because the poor bastard missed his cue by thirty seconds.”

Unable to stop himself, Mike ran his gaze down Lena’s body. As always, it looked incredible. She’d never been skinny, but the voluptuous curves she had were toned by dedicated hours on a StairMaster. The silk, black sleeveless shirt she wore for today’s introductory meeting showed off her arms, shoulders, and breasts with just the right amount of professional flirtation. Her burgundy pencil skirt highlighted the subtle strength of her thighs and calves, along with the narrow dip of her waist and the perfect form of her butt.

On her feet were stilettoes Mike guessed to be somewhere in the six-inch range. That would put Lena at five feet seven. Barefoot, the top of her head reached his solar plexus.

“And the network backed her up,” Julian’s voice sounded both mortified and awestruck, “because the news program jumped five points in the ratings the week she took over the EP role.”

Mike’s gut knotted again, dragging his stare from Lena to his own lukewarm coffee.

He remembered the incident Julian was referring to well. It turned out the cameraman had fabricated the cancer scare to avoid being fired for being drunk at work. Not a smart move. Mike had been there the night the drunken cameraman caused major problems during a live feed.

He’d been the program’s main sports reporter. He was sitting behind the desk, waiting for the camera to cut to him when the Ando—the cameraman—completely missed the cue. As a consequence, the female news anchor had been caught on live television scratching her nostril with a well-manicured nail.

He’d enjoyed working for that program. There’d been a real sense of fun there. He’d been earning almost six-figures back then just for talking about something he loved. He was earning more than that now, but it wasn’t the same. Nothing really was, since—

He killed the thought and took a sip of coffee. Was there any chance he’d get through this meeting without Lena acknowledging he was there?

No. What chance is there you’re going to get through it with your balls intact?

His balls. God, the last time his balls and Lena had been in the same thought, he’d been staring at a yellow-gold band sitting at the bottom of a loo.

“I also heard,” Julian went on, obviously hell-bent on drawing attention to himself and Mike regardless of their new EP’s reputation, “she took her ex-husband to the cleaners. Eviscerated the poor bastard through her lawyers. Took his dignity and his Maserati. All because of unsubstantiated rumours the guy had a thing with their dog-walker.”

“There was no thing,” Mike growled, before he realized what he was saying.

Everyone in the room snapped their attention to him. Everyone—News at Nine’s two news anchors, the program’s producer and associate producer, the news director, the social media manager, and N@9’s three news writers.

At Mike’s side, Julian let out a surprised snort.

“Lena,” he said. He curled his lips into the patented Michael Bailey smirk, the one that had landed him the title of TV Week’s Sexiest Man on Television three years running.

Until that title was used as a weapon against him, of course.

At the end of the table, Lena Wilkes raised an eyebrow, her own lips curling. Fuck, those lips… He hadn’t thought of those lips in quite a while.

Bullshit. You thought about them last night. Wrapped around your—