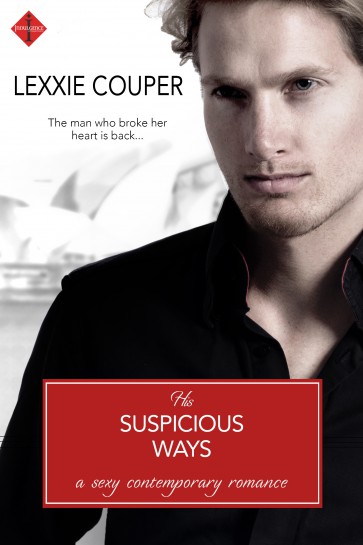 “I have to say, that’s some colorful language you’ve got there, Ms Graham.”

Ali froze, cold terror slamming into her at the deep, smooth and entirely too-familiar male voice sounding behind her. Her heart smashed into her throat and she squeezed her eyes shut, terror turning to stunned disbelief. You’ve got to be kidding, she thought. He can’t be back in Australia. He can’t be.

Entirely uninvited, an image of the owner of the voice filled her head and her pulse quickened. She hadn’t seen Jackson McKenzie in four years, but that made little difference. His image was just as clear and sharp and vivid as if she’d only seen him an hour ago. And just like it had four years ago, her body was reacting as if she was a silly teenage girl with a sillier crush—her nipples pinching hard, her breath growing rapid and her mouth going dry.

“Are you going to turn around any time soon and say hello?”

The voice—his voice—caressed her senses some more, each word thrumming with sardonic humor. The same sardonic humor she’d loved so much back when she’d been a naïve idiot.

She dropped her gaze to Wind Seeker’sdeck, following its line to the bow. It was a beautiful boat, a majestic forty-five-foot sloop designed and built by her father ten years ago—a gift for her mother as a wedding-anniversary present. The yacht had been her father’s passion. Since his death, it had been her passion too. And her livelihood.

He’s not going away. You know that, don’t you, Ali?

With a sharp sigh and a muttered “shit”, Ali turned, directing her churlish glare away from her still-throbbing toe to the tall man standing on the jetty beside her boat. She jutted out her chin, letting him see her contempt. “What the hell are you doing here, Jack?”

Jackson McKenzie, her father’s best friend and once business partner, cocked a thick golden-honey eyebrow. “That’s an interesting way to greet your old sailing buddy.” Sea-green eyes pinned her from behind thin gold-framed glasses and a small grin played over lips that were entirely too kissable. He chuckled. “Anyone would think you haven’t missed me.”

Ali scowled. “You were my father’s sailing buddy, Jack. Not mine. And I haven’t missed you. Not in the slightest.”

Jack’s chuckle met her ears again, the relaxed, somehow far-too knowing sound igniting a flare of anger in her chest and—God help her—a blossom of heat deep between her thighs. His grin stretched wider, flashing white even teeth at her. “Liar.”

Ali bit back a scream. “What are you doing here, Jack?” she repeated, fighting like hell to ignore the unnerving sensation stirring in the pit of her belly. He didn’t turn her on any more. He didn’t. “And don’t tell me it’s a social visit, because I’m not that gullible anymore.”

The corners of his mouth twitched. “It’s been a while, Ali.” He ignored her question—again. “You’ve grown up.”

She gave him a flat look. “You’re right. It has been awhile. Four years in fact. My father’s funeral. I wore black, remember?”

As if she hadn’t mentioned the horrible day, Jack’s mouth played with a smile some more. “Are you going to invite me aboard?”

Ali raised her eyebrows, crossing her arms across her breasts. “Hmmm, let me think… No.”

Jack’s smile turned mocking and he shook his head, those green eyes of his never leaving her face. “Still the spoilt teenager, I see.”

Renewed frustration and anger rolled through Ali. She jutted out her chin some more. If she wasn’t careful, the way she was carrying on she’d put her neck out. “I’m twenty four, thank you very much,” she snapped. “Not a teenager.” Damn him, why did he make her so flustered so fast?

Jack suppressed a laugh. “And yet so easily provoked. Nothing has changed.”

Ali’s breath caught in her throat. Goddamn it, Ali Graham. She gave herself a savage mental rap. Get a grip. Do you want him to see you like this? Do you want to give him the satisfaction?

With forced bravado, she turned her back on him, her heart a wild trip-hammer slamming against her breastbone. “I’ve work to do,” she flung over her shoulder, determined to sound indifferent as she pulled on the boom’s rigging. “It was…nice…to see you.”

Damn it. He still did it to her. Still messed her up even after what he’d done.

A chill cut straight to Ali’s heart at Jack’s soft question. She tightened her fists on the rigging, the steel rope biting into her flesh.

Damn it. He knows. He knows about the loan.
Of course he knew. Why else did she think he was there? To say sorry for four years ago? To beg her forgiveness? To make love to her again?