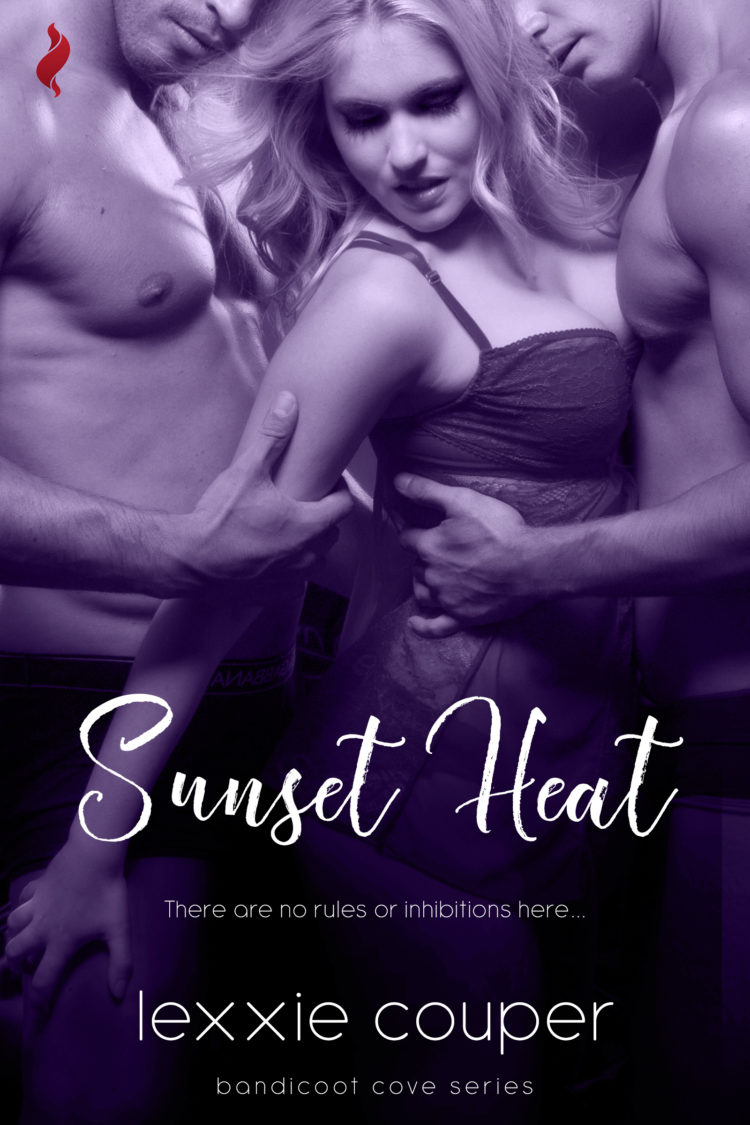 A photographer, a firefighter, a rake. Let the debauchery begin!

Kennedy never expected to run into Luke, the hot Australian firefighter she had a mind-blowing one-night stand with four months ago, on the tropical island where she’s now the official resort photographer. Even more surprising is how equally turned on she is by his hunky British cousin, Addison.

Finding the feisty, flirty American he met at a New York bar is a surprise for Luke. Even more surprising is how he can’t stop thinking about sharing the woman of his dreams with his cousin.

Always the player, Addison invited himself along on his cousin’s weekend away at the sinfully hot Bandicoot resort looking for some fun. But how can he tell his cousin they’re interested in the same woman? And that he doesn’t only want her body?

Kennedy Collins hated butterflies. She knew it was a stupid, ridiculous phobia, but there it was all the same. Lepidopterophobia. The fear of butterflies and moths. Not spiders or snakes or sharks or axe-wielding psychopaths, but butterflies. Freaking flittery-fluttery little winged things no one in their right mind would be scared of. Kennedy was scared of them, though. Absolutely petrified of them. And Australian butterflies were worse. Who knew if they were as deadly and dangerous as the rest of the godforsaken wildlife in the country? Which meant she ran like a demon was on her tail when the multicolored little flittery-fluttery winged thing had flittered and fluttered its malevolent way into her suite through the open patio door just as she was about to go have a shower.

Ran like the petrified lunatic she was, leaving her recently worn yoga clothes on the floor behind her, her heart racing, her mouth dry, her pulse pounding. Fled her suite like a wimp, away from the unpredictable menacing butterfly, any hope of rational thought destroyed by unhinged terror.

Kennedy’s flustered thoughts screamed to a halt. God save her, the stunned man was Luke Beasley.

Her heart—already smashing into her throat with abject terror—smashed some more. “Luke!” she burst out, throwing herself into the massive Australian’s arms. It didn’t matter that she’d snuck out of the guy’s hotel room four months ago after a night of wild sex and hadn’t spoken to him since. It didn’t matter that he probably didn’t remember her, due to the copious number of drinks they’d consumed in the New York bar in which they’d met. It didn’t matter, because there was a goddamn butterfly in her room, a goddamn butterfly, and he was a firefighter, and firefighters saved people, and she needed saving, and he was going to save her, and she was—

Two strong hands wrapped around her upper arms, and Kennedy yelped. Her heart continued its wrecking-ball attitude in her throat and she plastered herself against Luke’s hard body. The butterfly? What if the butterfly—

“You know her, convict?”

Another voice joined Luke’s rumble, deep and cut with a crisp British accent, but Kennedy didn’t care. “Luke,” she all but cried, “there’s a…oh God, help me there’s a…” An image of the butterfly flashed through her mind, malicious and demonic and tiny and colorful, and her throat seized up. She clung to the man she’d had the most wicked one-night stand with four months ago, her mouth working but nothing coming out of it.

Serious brown eyes gazed down at her. The hands on her arms tightened. “Jesus, Kennedy, you look terrified. What’s going on?”

She tried to tell him. Tried to vocalize the words, but at the mere thought of the winged creature in her suite her belly knotted, her tongue thickened, and all she could do was shake her head and cling to him.

“Is there someone in your room?” Luke’s expression turned dark. Dangerous. “Did someone attack—” His fingers dug into her arms with brutal pressure for a split second and then he was letting her go, spinning away to barge into her suite.

Followed immediately by the other man.

Kennedy staggered back a step. Her blood roared in her ears. A rational part of her mind knew they thought she’d been attacked by a person. That they’d stormed into her suite looking for a rapist. Instead they would find a butterfly and—

Ice-cold terror sank into her belly, and she staggered back another step. Only to squeal and leap forward when her naked ass brushed against something soft and—

“Kennedy?” Luke bolted from the room, his stare swinging wildly around her. “Where is he? Where—”

She jerked her stare from the fern frond behind her and shook her head. No, her whole body shook. She stared at him, knowing she was naked, knowing she was ridiculous, but incapable of doing anything but shake. If only she could—

Luke spun to face the other man appearing at Kennedy’s suite door. “Did you find anything?”

The other man, a leaner version of Luke with dark hair instead of blond and blue eyes instead of brown, gave Kennedy a quick look. His eyebrows pulled together. “Not exactly.”

Kennedy’s belly rolled. She tried to step away, but Luke stopped her, one large, muscled arm snaking around her waist, his other covering her breasts. If she weren’t so sick with fear she’d be grateful. “What do you mean, not exactly? She didn’t just run out of her room naked for nothing.”

The other man flicked her a sorry look, his eyebrows knitting together some more. “Not for nothing, cousin.”

He lifted his arm. Kennedy cried out, fighting against Luke’s arms, squeezing her eyes shut. No. No, no, no. She had to get away. From the butterfly. From the—

Kennedy opened her eyes and stared at the wide strip of fluffy white toweling in the man’s extended hand.

She let out a wobbly breath, reaching around Luke to take the towel. She gave the Brit a slow smile and wrapped the towel around her body. Her heart still thumped hard in her throat, her blood still roared in her ears, and her belly was still knotted so tightly she wanted to throw up. But somehow, with Luke holding her, his massive body just as hard and solid as it had been four months ago, maybe more so, she could hold her ground.

Luke’s fingers pressed beneath her chin, forcing her to look up at him. “Kennedy, what’s going on?”