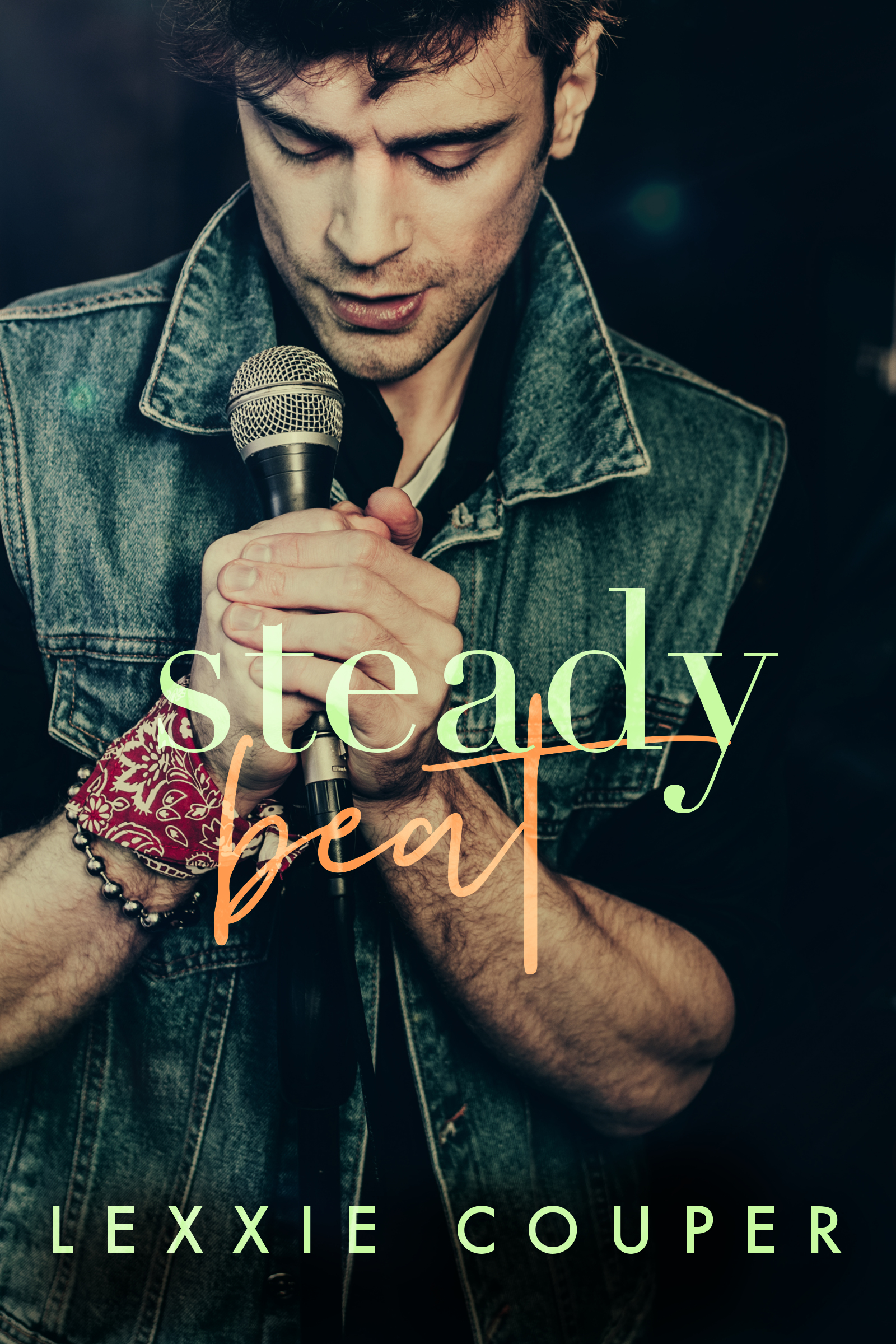 “Don’t worry. They’re not going to eat you.” He drew his head closer to hers. “I might. Later.”

He never missed a beat…until she taught him a whole new rhythm.

When Pepper Kerrigan overhears the rock band, Blackthorne, talking reunion, she pushes her self-doubt aside, calls on her encyclopaedic music knowledge and challenges Noah Holden, drummer extraordinaire, to a trivia contest. Her prize should she win? An audition. His? A kiss.

Their smoking sexual chemistry guarantees victory—for them both.

Back when he was playing drums for rock star Nick Blackthorne, it was easy for Noah to focus on the sticks in his hand. Now that the band is getting back together, he’s excited—and worried. His ADHD has made every minute of his post-Blackthorne life a chaotic mess.

With Pepper, Noah is finally able to control his stormy creative energy. But when his wild past catches up with him, he faces the fight of his life to keep from losing his smoky-voiced angel. The one woman who keeps his mind—and his heart—staying on rhythm.

“Lexxie has such a way of building the heat and when it’s time, a volcano’s got nothing on her!” – FIVE STARS, Slick Reads

Noah forced himself not to fidget. Or blink. If he blinked, maybe the goddess in hot pants would disappear in a puff of taunting smoke, leaving him wondering if she’d ever really been there.

Christ, her eyes were stunning. Bluer than he’d first thought, and flecked with deep-emerald green. And her skin. So flawless and creamy. The urge to lean forward and trace the tip of his tongue over the high curve of her cheek was damn near impossible to deny. As was the desire to snare the straight weight of her sable ponytail in his fist and pull her toward him. Her lips were made to be kissed. He could see that. Soft and full and devoid of lipstick or gloss. Just naturally beautiful and perfect.

His heart punched hard in his chest, pounding out a beat he’d hadn’t heard in his life for a very long time.

A beat he could move to.

She’s not a groupie, Holden. She’s your waitress.

The thought grounded him. They’d been in the bar for well over an hour, and she hadn’t come anywhere near them. If she wanted to sleep with him, surely she would have made her move before now.

“What proposition?” he asked, fighting to keep his voice detached. He reached for a peanut. He hated peanuts, but at least it gave him something to do with his hands.

What? Instead of burying them in her hair? Or smoothing them over her—

The goddess shifted a little, her butt barely perched on the edge of the chair Jax had so recently occupied. Her tongue slipped over her top lip in a quick little swipe. Her eyes closed for a split second.

An overwhelming sense of dismay hit Noah at the loss of their mesmerizing intensity on his face. He liked her looking at him. A lot.

Her statement slapped into him like a cold fist.

He blinked. Had he misheard her? “Sorry? You want to what?”

She swallowed. Hesitation clouded her brilliant eyes. Her hands cupped her elbows. “S-sing for you. For…for the band. I’d like to audition for—”

The wind left Noah in a gush. He frowned, a prickling sense of disappointment washing over him. She didn’t want to sleep with him. She really wasn’t a groupie. Or a waitress hoping to score a famous tumble in the sack. She wanted to—

“Come again?” He leant forward. Perhaps he’d heard her wrong? He was known to mishear things. It came from not really keeping his attention on anything for long.

Huh, your attention has been on her from the second you saw her, Holden. You didn’t mishear.

The woman straightened her spine. She lifted her chin. Flattened her palms on her thighs. “Audition for lead singer.”

Noah stared at her. For the life of him, he didn’t know what to—

The woman jolted to her feet. “I’m sorry, I shouldn’t have…” She trailed away, her soft New York accent turning the last word to a murmured drawl. Before Noah could utter a sound, she turned and hurried from the table.

But she stopped two tables from his.

Noah watched her shake her head, his gaze tracking the swishing wave of her long ponytail. His gut tightened. His throat did the same. It wasn’t until she swung back to face him that he gushed out the breath he didn’t know he’d been holding.

She reached his table in three long strides, her intense blue eyes fixed on his face. She stood beside him, full breasts straining against the snug white cotton of her T-shirt as she placed her hands on the tabletop and bent toward him. “I’ll make you a deal,” she said, the words quick, her voice husky. “I read in an article in Rolling Stone that you have an amazing knowledge of music trivia. If I beat you in a music-trivia challenge, you let me sing for the band. Just that. All I want is the chance to…” She faltered, uncertainty flickering in her eyes, and then shook her head a little and drilled him with her stare again. “All I want is the chance to let you hear me sing. If I beat you at music trivia, you convince the rest of the band to let me audition.”

If I beat you.

Her words whispered through Noah’s whirling head. He couldn’t tear his gaze from hers. He should be telling her no, right now. He should be brushing her off, maybe even leave the bar to emphasize the point. He should be pissed she’d been eavesdropping. Instead, he studied her face—even more arresting and beautiful this close—as her words echoed through his mind.

If I beat you.

“And if I beat you?” The question left him on a murmured taunt.

The woman facing him down did the unexpected. She laughed.

Noah’s heart beat faster in his chest. His gut knotted. Christ, her laugh was wonderful. Rhythmical. It at once melted away the tension in her body and flooded Noah’s body with heat. Tight, thick heat threading its eager way to his groin.

“If I beat you?” he prodded, leaning closer to her. “What happens then?”

She licked her top lip with the tip of her tongue. “I…”

Noah reached up and traced his finger over her bottom lip. “I get to kiss you.” The bar disappeared. Nothing existed except the woman and her challenge. “I win, I get to kiss you. For as long as I like.”

The woman’s breath escaped her in a soft gasp. She pulled away from him—just enough to cause his finger to slip from her lip. If it wasn’t for the fact her pupils were dilated, Noah would think he’d offended her.

But he knew exactly what dilated pupils meant when a woman was with him—arousal. His gorgeous, conflicted waitress was turned on. Now all he needed was for her to—

“Agreed.” She held his stare, her shoulders straight. “I’m off work in twenty minutes. I’m going to bring you another scotch, on me, while you wait.”

Noah cocked an eyebrow. “Wait?” He’d never had a woman tell him he had to wait for her before. Even Heather had leapt at his every command on the rare occasion he gave them. Right up until she’d walked out with Maxie the mutt, that was. He’d told her to come back. To give him another chance. She hadn’t. “You want me to wait for you?”

His waitress nodded. “It’ll be worth it. Promise.”

“The kiss? You better believe it.”

She laughed, and once again Noah’s groin reacted to the rich, lyrical sound.

He shook his head. “Oh, I’m not going anywhere. Promise.”

The corners of her lips curled in a smile Noah could only call shy. Shy? How was that possible after the challenge she’d just laid down? Especially given the desire equal to his own he saw in her eyes.

Such a conflict. It was hypnotic. Sublime.

She turned and walked away from the table without a word. Noah could tell the subtle sway of her hips wasn’t an affectation designed to garner attention but her natural movement. Damn, he could watch her hips move like that all day. He couldn’t wait to smooth his hands over those hips and hold her to his body as he kissed her.

“Hey,” he called out, his pulse pounding faster when she threw him a quick look over her shoulder.
“What’s your name?”

She lowered her lashes. A faint pink painted her cheeks. “Pepper.”