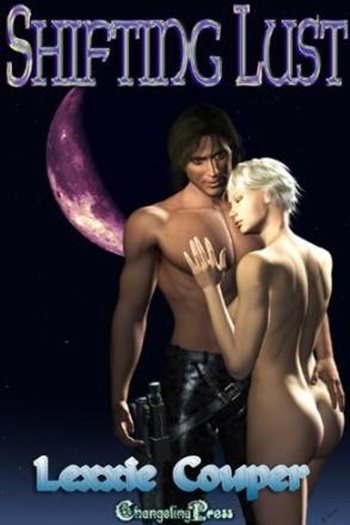 Raiven a ’Tor rested his elbows on the grimy bar ignoring the naked Jaxian hooker next to him who was trying to get his attention.

The bartender approached, wiping his upper hands on a filthy towel as his lower hands poured a shot of vivid red liquid into a tiny glass.

Raiven took the drink, downing it in one mouthful. The bartender raised his eyebrows, grunted once and turned to walk away. Raiven stopped him. “Leave the bottle.”

“Need some company?” The hooker slid closer to him, sending off waves of musky pheromones.

Raiven poured himself another shot. “No.”

“Come on, baby.” She trailed her upper fingers along his hard jaw, her lower hand skimming his black leather-clad thigh. “I’m the best there is.” Her dancing fingers slipped to his crotch and squeezed his cock, murmuring in delight at what she found. “Impressive.”

A’Tor grabbed her wrist and turned his flat grey eyes on her. “Go away.”

The hooker gave him a filthy glare. “Take it up the ass, do you?”

Raiven shifted his weight, moving his hand to rest on the butt of the weapon slung low on his hip. The Jaxian whore dropped her eyes and the colour drained from her purple face as she spied the lethal Terran gun. She shot Raiven a frightened look, and he suppressed a grim smile. Now she knew who he was, she’d fuck off and leave him alone. They always did.

“Raiven a’Tor?” she whispered, backing away from him quickly in a fearful bow, her four arms wrapped around her naked torso. “Forgive, sir.”

He turned back to his drink. Delekian Firewater was famous for burning away reality, so why was he still so fucking aware of the emptiness in his heart?

It doesn’t matter. You’ll find her. It’s what you do.

An oily voice addressed him and he shot a look to his left at his new companion. The Palon was small and wiry. Shifty eyes darted around the crowded bar, nervous. Raiven poured another drink. “Who’s asking?”

The Palon ignored the question. “You lookin’ for the Chamelyon female, yes? The one with the black eyes?”

Raiven’s chest tightened. “Yes.” It had been so long. Had he finally tracked her down?

The Palon’s beady eyes locked on him. “Someone else was also lookin’ for her.” Fear and apprehension wavered in his voice with good reason. It was common knowledge throughout the six systems what happened to someone foolish enough to piss off the Terran bounty hunter. “They got to her first.”

The constant ache in a’Tor’s chest turned cold. “Who?”