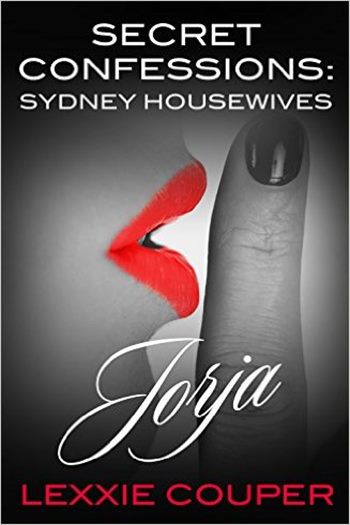 From the hottest writers in Australia comes a scintillating new series. Enter the world of Sydney’s elite, and find out what goes on behind the doors of the most exclusive addresses in the country…

Meet the Housewives of Sydney. They are wealthy, elegant, poised, and constantly in the public eye. But what goes on behind closed doors, in the private homes and parties where the cameras and paparazzi aren’t welcome? Delve into the most personal details of their relationships, their friendships and their lives. The only question is: can you handle the heat?

Rugged, athletic, and absolutely enormous, Mud is aggressive on the rugby field and off. It takes a special kind of woman to tame the beast and take on all that man, but Jorja has never been anything less than exceptional.

But something is going on inside her warrior man, something that she can’t see or reach or touch. She has always been the one able to get through and bring him down, so why does she feel like everything is slipping away?

A man full of pent-up testosterone, Jorja decided—not for the umpteenth time—is a dangerous man.

And a sexy one.

Wiping the sweat from his face, her boyfriend—a man currently very full of pent-up testosterone—killed the six thousand dollar treadmill’s power and fixed her with a hungry look.

Jorja squeezed her thighs together and shifted a little on the stool beside the balcony railing from where she watched him.

Crowned by the fawning national sports media with the nickname Mud, Daniel Hiddleston wiped his gleaming face again, stepped off the treadmill and stalked towards her.

She pressed her thighs together once again, her sex growing tight.

She knew what he wanted.

Mud barely survived the off-season of the NRL without losing it at least once. The captain of the Australian Rugby League team, as well as the captain of the national premiers for the last two years, Mud struggled to control the latent adrenaline and aggression in his veins. The inability to push himself to physically impossible levels during the summer months drove him to a brink Jorja found terrifying. When he was consumed with the urge to unleash the primitive animal hell-bent on destroying his on-field rivals, he sought out relief in one way, and one way only.

Through the complete and utter sexual domination of her body.

Watching him prowl towards her now—for there could be no other word to describe the way he moved from their personal gym to the granite-paved balcony, Jorja felt her pulse quicken.

That she sat outside, where anyone with a camera and a zoom lens could capture every moment of what was to come, didn’t faze Mud at all. When he wanted her, he took her.

And she could see, by the way his nostrils flared and his light-blue stare devoured her bikini-clad body, he wanted her.

God, it turned her on.

He stopped only when his stomach—a sculpted six-pack Jorja loved to explore with her tongue and lips—brushed her knees.

She met his hungry stare, knowing her Oroton sunglasses hid from him the fear and excitement in her eyes. Her nipples pebbled inside the skimpy twin triangles of her Fendi bikini top, an exquisite agony spearing though her from their hardened form. Her breath slipped from her in shallow pants. The budget report from her latest celebrity fund-raising social event sat forgotten on her iPad. She’d been kidding herself trying to maintain focus on it anyway. When Mud worked out, it was all she could do not to bury her fingers into her slick pussy and ride her hand to release.

There was a reason women constantly threw themselves at her boyfriend and it had little to do with his sporting status in Australia and a lot to do with the way he looked. With the virile sexuality he exuded. Like a barely tamed animal ready to fuck, to dominate, to enslave…to devour his prey.

A shiver rippled down Jorja’s spine and she sucked in a soft gasp.

“You’re sweaty,” she stated, trying to project an air of repulsed indifference.

The ruse had no impact. Mud knew the feel of his perspiration-slick skin sliding over hers turned her on, just as he knew she craved his touch.

Raising his arm, the muscles beneath his damp, glistening skin flexing with sublime perfection, Mud plucked her sunglasses from her face and tossed them over the railing.

A flash of irritation licked at her mounting arousal. Damn it, they cost three thousand dollars. And the third pair he’d thrown into the waters of Woolloomooloo Bay this week.

If it weren’t for the fact he took her to sexual heaven over and over after each careless disposal, she’d tell him to stop being so goddamn—

Before the thought could finish forming in Jorja’s mind, Mud hooked his fingers beneath the edge of her bikini top and yanked the twin black triangles aside.

Her breasts—small as they were—tumbled free. Her nipples pinched tighter. The hot summer day razed her suddenly exposed flesh, like a branding caress.

She gasped, staring into Mud’s gaze as, without a word, he cupped each breast with his calloused hands and scraped his thumbs over her nipples.

His name fell from her on a shaky moan. His nostrils flared. She only ever called him his full name when he took her like this: forcefully and arrogantly. Like she was his possession.

He played football the same way: uncompromising, unapologetic, aggressive. It was what made him so feared and revered on the field. What made him the highest paid professional league player the country had ever seen.

“Tell me what you want me to do to you right at this very second, JJ,” he ordered, his deep voice playing with her senses as much as his thumbs played with her nipples.

She drew a slow, hitching breath. A part of her wanted to check over her shoulder, to make sure none of their fellow residents of the exclusive harbourside wharf apartment were outside. Another part, a wanton part, thrilled at the debauched thought.

She wasn’t an exhibitionist. She was just…his. Oh God, was she his.

Displeased with her failure to answer, Mud pinched her nipples. “Tell me, JJ,” he commanded, parting her thighs with two firm nudges from his knee. He moved to stand between her spread legs, his sweat-moist hips and waist sliding up the inside length of her thighs until the bulge of his erection—trapped in his workout shorts—rubbed the folds of her pussy through her bikini bottom.

“Take me inside,” she whispered.

Her best friend, Meagan, was due to visit within the next hour. Of all the women that Jorja interacted with, the celebrity chef was the least likely to gossip about finding Mud doing wicked things to her body out in public. Jorja, however, wasn’t prepared to take the risk. Meagan was a kindred spirit when it came to the machinations and social power-playing amongst their social circle. A woman less inclined to indulge in her obscene wealth and social status and more inclined to quietly live a “normal” life whenever she could, but Jorja still kept certain facets of her life secret. Including how much she enjoyed surrendering to Mud’s primitive, aggressive possession of her body.

A ripple of concentrated lust travelled up Jorja’s spine at his growled question. He smoothed his hands from her breasts, down her ribcage, over her hips to grip her backside, yanking her closer to his body.

His rigid cock ground to her sex as she flattened her hands to his chest, his damp chest hairs tickling her palms.

“What,” he lowered his head until his lips were but a breath from hers, “ if I want to make you come right here on this stool?”