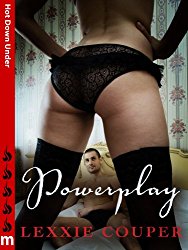 Sam and Nicky White are a typical contemporary power couple.

She’s a ball-busting vice president at the country’s leading bank, he’s the trophy husband she wears on her arm at executive dinners. Except when they are in the bedroom.

In the bedroom, their “games” of sexual domination have Sam firmly in the position of power. Nicky, however, is ready to bring the game to an end but Sam has other ideas.

During a night of domination and submission in their isolated country cottage, an unexpected guest drops in on the couple. A dangerous guest. And for Sam and Nicky, nothing will ever be the same again.

This story is rated “Very Hot” (5 out of 5 flames) and contains F/M pairings.