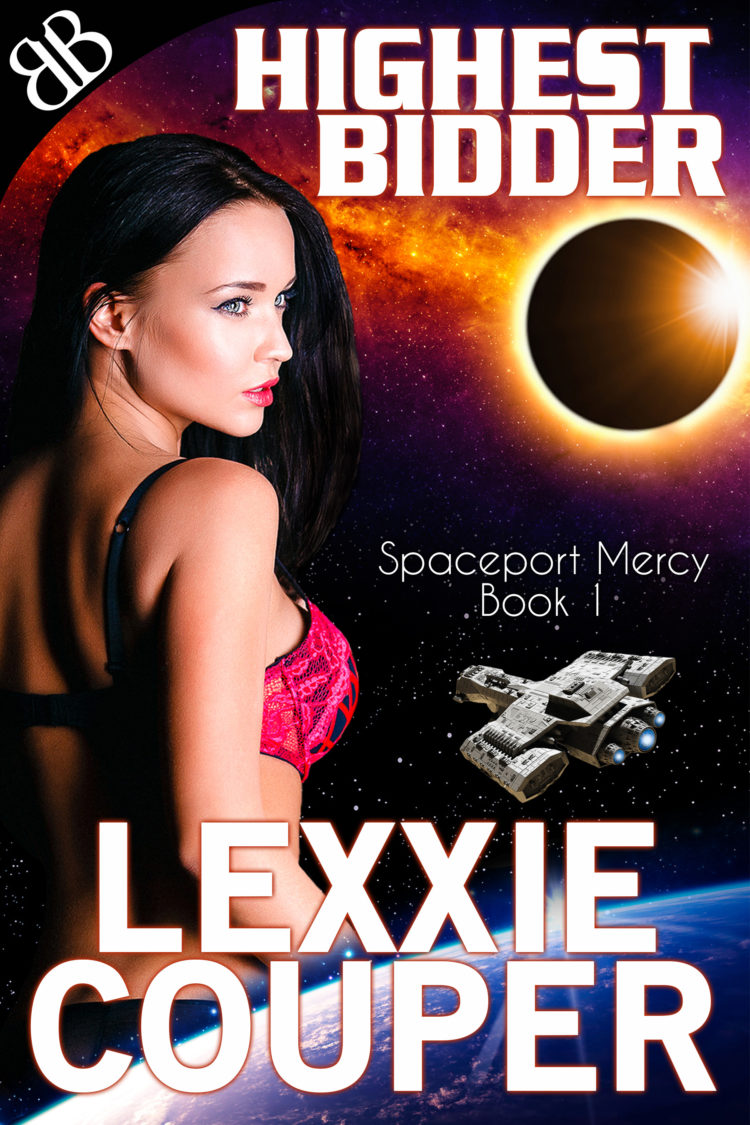 Dreylan Tarq was two steps into The Puckered Tip when someone tried to kill him.

The blade sliced through the space just to the right of his head, so close he felt the dank air ripple in its path. Growling silently, he snatched the short, lethally sharp blade from the air and sent it back through the sex club’s heady artificial environment with just a flick of his wrist.

Straight into the ridged forehead of the Prijchan who’d thrown it.

The Prijchan’s eyes widened, and then an ear-splitting squeal silenced the raucous club. The crowd reeled as one, seconds before the hulking blue-skinned Prijchan fell flat on his back to the filthy floor with a ground-shuddering thud, black hilt jutting from between his bulging eyes.

Dreylan turned away from the jerking form, casting an almost bored look over the gaping, silent partiers. “Anyone else want a go?” No one said a word. Or dared draw a breath. “Good.” He nodded. “’Cause I’m thirsty.”

He continued to make his way to The Puckered Tip’s bar, ignoring the gawking patrons as they parted before him.

Resting his elbows on the bar, Dreylan studied the rows of bottles and decanters lining the wall before him. Not one bottle of Ozio to be seen. He let out a dramatic sigh and shook his head. Little remained of Ezilia from before the violent interplanetary wars that gave birth to the Galactic Union, and what did was often putrid, mutated and diseased. A few cases of Ozio, however, had survived the GU’s swift and draconian “cleansing of moral decay and filth”. If a man were lucky, he could find a bar that had a bottle and indulge. After coughing up an obscene number of credits, that is.

Dreylan had the credits but it seemed he didn’t have the luck. Not today at least. “H-Two,” he ordered, flicking the barkeep a quick look. Behind him, the crowd had begun to move. To whisper.

Hearing his name in the hushed murmurs, Dreylan rolled his eyes. Gods, couldn’t he go anywhere without being recognized?

The bartender returned, trying not to stare as he placed a filthy glass on the counter. Dreylan looked at the murky, crap-brown liquid. “What the hell is this?”

The Myxmak swallowed, all four of his eyes blinking rapidly. “H-Two, s-sir. I mean Sir Tarq. I mean—”

Dreylan shook his head. “Get outta here,” he snarled, waving the quivering bartender away. Picking up the glass, he studied the contents through its grimy sides. No Ozio. No H-Two. So much for quenching his thirst. The Puckered Tip had not impressed him so far.

Returning the glass to the counter, Dreylan counted to five.

Then pulled his disruptor on the fat Terran suddenly joining him at the bar. “Hello, peace-keeper.” He leveled the gun at the man’s flabby gut. “What do you want?”

The Terran grinned. “Long time no see, Tarq. I see you took care of Blegd.”

Dreylan cast a look at the motionless Prijchan, still sprawled on the floor. Someone, he noted with a smirk, had pulled the bounty hunter’s blade from his forehead. Someone else had balanced a glass of what looked like Itillian ale over the spot where the wound would be. “These dolts get slower and more stupid every cycle.” He turned back to the bar, re-holstered the disrupter and picked up his glass. “Seriously, Mak, what idiot paid that fool to bring me in?”

Mak Wylsen chuckled, his enormous gut wobbling. “That idiot would be me, Tarq.” He slid his own weapon from its harness and placed it on the counter facing Dreylan. “He wasn’t supposed to stick you, of course, but I guess you get what you pay for. Hate to do this to you, good buddy, but by order of the Galactic Union, you’re under arrest.”

Dreylan glanced down at the peace-keeper’s neutralizer, shaking his head in disgusted contempt. “Are you sure you want to do this, Mak?”

“Not at all.” Mak pulled an apologetic face, but the gun didn’t move. “But ever since my partner got himself kicked off the force, I’ve been doing all sorts of things I don’t want to do.”

Dreylan’s grip on the filthy glass tightened and a surge of anger rolled through his chest. “I wasn’t kicked off, Mak. You know that.”

“Yeah, I know that, but anyone who wants to keep their nuts attached says otherwise.” Mak adjusted himself on the barstool, a look of guilt flashing across his fleshy face as his hand moved to his gun again. “I’m a bit fond of my balls, Tarq. I plan to keep them a few years longer, no matter how much of a fuckwit my boss is. Or how good a partner you were.”

“Which is why you’re doing exactly what the premier orders, huh?” Dreylan studied the murky liquid in his glass. “No matter how stupid…or dangerous.”

Mak had the decency to look uncomfortable. “Are you coming in on your own or do I need to restrain you?”

Still studying the cloudy glass of H-Two, Dreylan cocked an eyebrow, a knot of dark anticipation squirming in his chest. “I think I can come in on my own. I’ve been wanting to have a word with Premier Ipari for quite some time now.”

Mak shot him a disgusted look. “I’m not taking you in so you can break the premier’s nose, Tarq.”