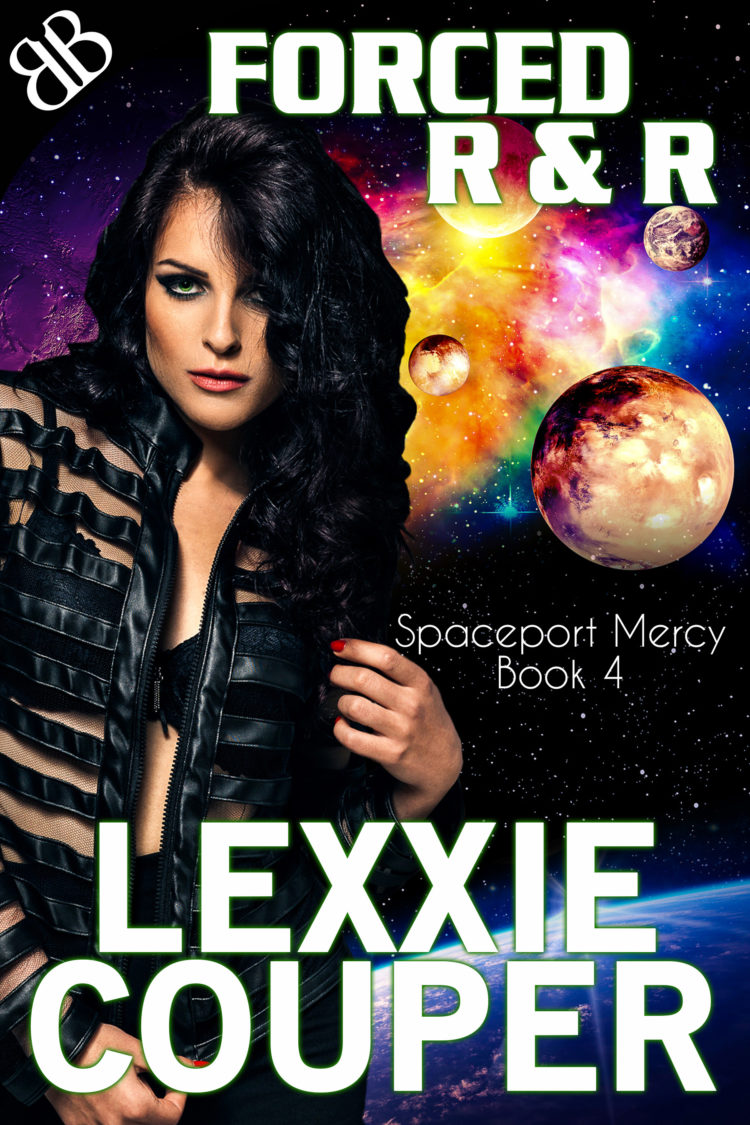 I hate R and R. Who needs it. I sure as shit don’t. Not just because I’ve had a tech upgrade (thanks to the Galactic Union’s super secret, Super-Cop initiative), but because seriously, what does one do on R and R anyway? Rest and relaxation? The most relaxing thing for me to do is bust the asses, noses, clavicles, sternums, necks, spines…well, you get the idea, of scum-bucket criminals. And I never rest from relaxing. I don’t want R and R. I don’t need it. I’m a freaking super-cop, for Otyn’s sake. Even before my tech implants I didn’t need it. R and R is for the weak, the pathetic. The lazy.

But what’s a tech-improved GU Enforcer to do when her commander orders her—orders her—to take a leave of absence? “You’re close to burn out,” he says. “You need some down time,” he says. I tell you what she does. She heads to Mercy spaceport. Cause honestly, you won’t find a greater horde of scum-bucket criminals in one place anywhere else in GU space—or any other space, for that matter. If it’s dodgy, chances are it’s at ‘Port Mercy. What better destination for unwanted R and R than a veritable cesspit of crooks?

A mere two steps into said cesspit and my mouth began to water and my tech began to zing.

By Otyn. The place was a smorgasbord.

Striding through the crowded docking level, I catalogued everything I saw. Known slave traders, infamous spice dealers, wanted WMD suppliers, hell, even a GU-listed terrorist moved freely about their nefarious business, unaware a tech-enhanced GU Enforcer walked amongst them.

My mouth watered some more. I was going to have a blast. Why hadn’t I taken R and R be—

I snapped straight, scanning the horde around me.

One of the upgrades the GU white-coats had so thoughtfully installed in me allowed my tech to detect battle class droids and cyborgs of any design, make and model. That upgrade—millions of microscopic nanobots implanted in my cerebral cortex—now fired into pulsing life. Somewhere on the thoroughfare was a R42 battle droid, a highly efficient, volatile and superseded war-class android.

I searched the teeming masses again, tuning my tech into the R42’s energy emission. R42s were decommissioned by the GU for a reason. They were dangerous. If one walked ‘Port Mercy it was illegally activated and would need to be shut down.

My right hand automatically reached for my blaster before I remembered the spaceport’s strict boarding rules—no energy weapons in public places. I wriggled my fingers and forced calm into my muscles. No matter. It would be more fun taking out the droid barehanded.

Grinning, I scanned the crowd once again, zeroing my gaze in on a giant of a man dressed in combat fatigues not eight feet away.

The R42 shoved his, err, that should be its way through the packed thoroughfare and I followed. Eagerly.

As if I wouldn’t.

Five minutes on ‘Port Mercy and already I was enjoying my R and R. The R42 strode though the docking level, pushing people out of its way, its pace quickening. I narrowed my eyes, my stare locked on its towering frame. It seemed to be trying to allude something.

The thought had merit. R42s were still advanced tech. It was entirely possible a R42 operating in human stealth mode—as this one was—could detect the emissions of my own tech. Possible and, if the case, kinda fun. It would make bringing the battle droid down more challenging.

I lengthened my stride, dodging more than one scum-bucket, never taking my eyes off the droid.

Until the most gorgeous man I’ve ever seen crossed my line of sight, dressed in nothing but skin-tight black leather pants and a slave collar, his pitch hair tumbling around his shoulders in a tussled mess, his bronzed skin gleaming under the thoroughfare’s harsh lights, his muscles rippling with latent strength.

My feet stumbled a little and I bumped into a Raavelian hurrying past me. “Watch it, cunt,” he snarled, shoving at my chest.

Now normally, that kind of antisocial behavior would prompt me to slam the foul-mouthed git to the floor, break his shoulder-blade and threaten to teach him some manners. At this very moment in time however, education was far from my mind.

My tech was sparking into over-drive.

So was my pussy. Whoever the slave in the black leather was, every molecule of my existence, both engineered and biological, was reacting to him. Big time. Which made me…curious.

The last time I’d been sexually attracted to a man, they’d turned out to be a corrupt GU Peace-keeper.

What did it mean when not only my body reacted to the hunk, but my tech implants did as well? What did that make—

The slave turned his head and looked at me with eyes the color of Old Earth emeralds, the corners of his lips curling. As if he knew something I didn’t.