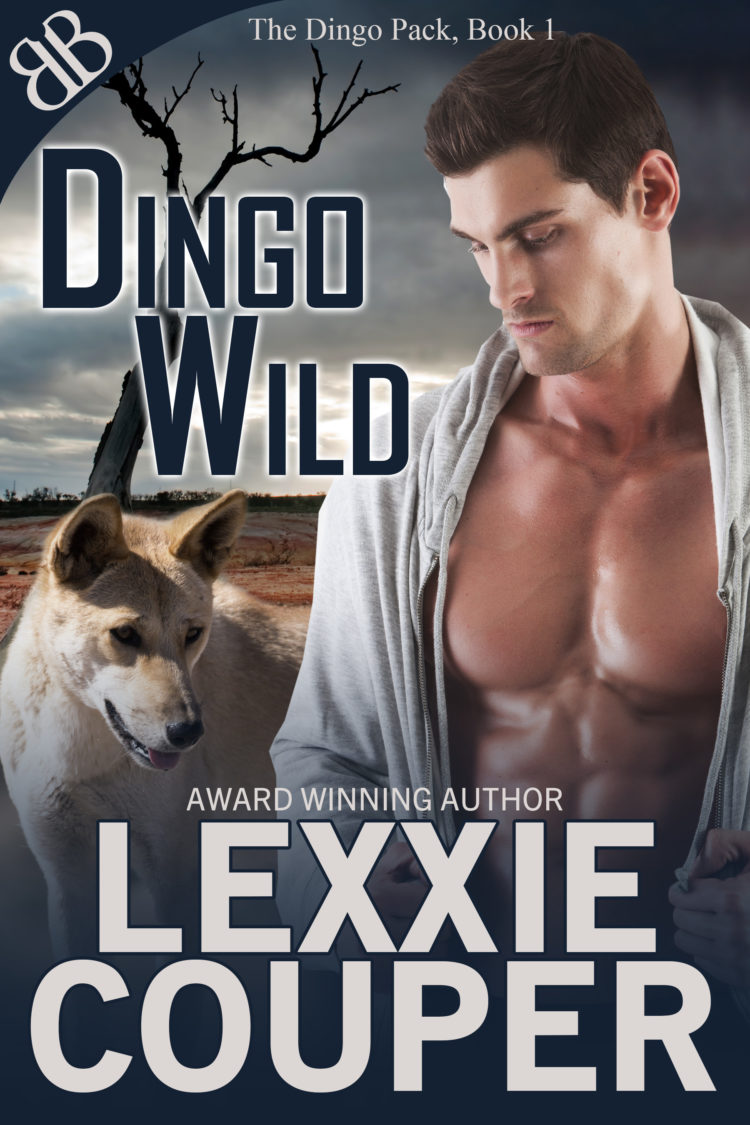 Searching for her missing uncle, Katy-Lin Yunker finds herself in the isolated, mysterious Australian Outback town of Kangaroo Creek. The whole town seems to have a secret, one that her heart tells her involves her AWOL, eccentric uncle. She’s at her wits end but determined to find him, no matter what the cost. And then the sexiest man she’s ever seen walks into the bar and things get really…dangerous.

Dean Singleton has tried to deny the animalistic nature of his species. A dingo shifter with a profound connection to the ancient magic of the land, Dean knows surrendering to his inner animal may lead him down a path he cannot come back from. But when he sees Katy-Lin—a human—the carnal desire he feels for her rocks him to his core. So what is he to do when he learns she’s the niece of the man who has uncovered the existence of his kind, threatening the safety of his pack and all the shifters in the Creek?

Dean and Katy find it impossible to fight against their attraction…but someone else has plans for Katy. Someone who wants Dean dead. In a land more brutal than most, this California girl is about to discover not only how wild a dingo shifter can be, but how fierce she can be.

So this is an Australian pub.

Katy-Lin Yunker stopped just inside the heavy glass door, looking around the dim interior of the bar.

Five men of various ages, sizes, and levels of consciousness regarded her with five various states of interest from where they sat—scattered—in the bar.

Katy bestowed them all a tentative smile.

One ginger-haired man flashed her a toothless grin, happily sliding his index finger in and out of the circle he’d made with the fingers of his other hand.

The unmistakable stench of alcohol and sweat threaded into Katy’s gasp and, before she could stop herself, she wrinkled her nose.

A low grunt of contempt from the very beefy man looking at her with wary curiosity from the bar told her she’d stuffed up.

So much for getting help here. Still, she had to try. Maybe she could put some of the All-American charm her Nan insisted she had in spades to use. Although, that charm had failed her thus far in her endeavor to find her missing uncle.

Lifting up her chin, she fixed her stare on the wiry man working behind the bar, shook her head with determination, shut out the nerves gnawing at her stomach, and—in a woefully lame attempt to seduce those still looking at her—crossed the dim room.

The beefy man who’d grunted at her nose curl made the same contemptuous sound again as she came to a stop beside him. His eyes narrowed as he shifted in his seat, not so much inching away from her, but rather giving himself a better view to take her all in.

Katy dragged her stare from Mr. Beefy, turning to the man who’d spoken on the other side of her.

He smirked up at her from his bar stool, flashing teeth whiter and far more pointed than Katy had ever seen. This close, she couldn’t miss the dandruff flakes in his greasy black hair, or the rank odor wafting from his thin frame.

“Give it a rest, Merv,” the man behind the bar—Ipo?—said.

Katy shuffled her feet—why the hell had she decided to wear heels to the Australian Outback?—cleared her throat and decided to ignore everyone else in the Longyard Pub except the barkeeper.

Pressing her palms to the edge of the bar, she poured her entire soul into the look she gave the man. “I’m looking for my uncle,” she said. “Can you—”

“Hot piece of arse is a Yank!” someone behind her rumbled.

Someone else behind her laughed. “Another one.”

Bells and whistles burst into life in Katy’s head. She spun around, scanning the murky interior. “Another one?” she echoed, jerking her stare from one man to another to another. “There was another American here recently? Can you tell me—”

“’Nother Yank broad,” the same voice rumbled from the shadows. “She lived ’ere for a while years ago b’fore takin’ off. Don’t know where she went.”

Katy tried not to slump.

A woman. Damn it. Her uncle was a lot of things, but he was most definitely male.

Letting out a sigh, she turned back to the bar and the wiry man behind it watching her with bored disinterest.

Once again, she pressed her palms to the edge of the counter and sought out his gaze. “Please,” she said, leaning towards him. “My uncle is missing and this town was the last place anyone heard from him.”

The barkeeper’s eyebrows shot up. Katy didn’t miss the quick eye-flick he shot someone behind her. “The Creek?” he asked, eyebrows settling back to their previous indifferent frown. “Your uncle was here in Kangaroo Creek?”

Katy nodded. A prickling heat crept up her spine. From his clear disbelief, or from the unsettling sensation her ass was being thoroughly checked out, she couldn’t tell. Like her heels, the short skirt she’d pulled on that morning before heading for Kangaroo Creek was also fast becoming a source of regret.

Life as a personal assistant to a television breakfast news anchor in San Diego had not prepared her for a desperate search mission on the other side of the world…although from the few minutes she’d spent in the isolated Outback town of Kangaroo Creek, other side of the galaxy seemed more accurate.

“His name is Martin McCoy.” She studied Ipo’s surreally ageless face. “He’s a professor of…of zoology and animal behavior and is studying ancient canine breeds. He’d heard there was a dingo colony near here that…that…”

She faltered. How the hell did she say that he believed these dingoes could shift between human and dingo form? She didn’t. She loved her uncle to bits, he was crazy and a little unusual—and a card-carrying cryptozoologist who firmly believed in the existence of what he called shape-shifters—but she couldn’t tell anyone why he was really here. She’d be wrapped in a straightjacket and deported out of the country for even suggesting it.

God help her uncle if he was over here announcing to all and sundry his theory.

Katy squealed at the new voice directly behind her. She spun around, staring up at the tall man with steel gray hair, incredible shoulders, and a hawkish nose standing but a foot away from her.

Her heart slammed up into her throat. Her pulse tripped over itself. Whoa, was this guy hot or what?

Mr. Silver Fox arched a heavy dark-brown eyebrow. His light blue eyes seemed to somehow catch what little light there was in the bar, turning his irises to sapphire chips. “That?” he repeated.

Katy swallowed. Why did she feel like she was suddenly under a microscope?

“That he thought might be worth studying,” she finished.

Damn, could everyone in the bar hear how crazy her pulse was? It had turned into a freaking cannon in her throat.

Mr. Silver Fox’s jaw bunched. His eyes narrowed. A fraction. If it wasn’t for the fact Katy was the PA to one of San Diego’s biggest divas and skilled at interpreting the makings of a seismic tantrum, she would have missed it.

The thought whispered through her mind a heartbeat before Mr. Silver Fox laughed. “The only dingoes around here are a scraggly mob living on the other side of Tin Hut Gully, isn’t that right, Merv?”

Was that a slight Russian accent? German? Definitely a European tinge of some kind.

Katy swallowed again. She watched Grayson—first name? Last?—chuckle and slap a firm hand on the shoulder of Mr. Beefy, who was once again staring at her with open contempt.

Jesus, this was a weird place.

She didn’t want to be here anymore. Not at all. But she had to be. She needed to find Uncle Martin. He’d been missing for almost a month now and she wasn’t leaving this freaking town until she had answers. Answers the hot-or-what guy standing in front of her had; at least, she hoped he did.

“Do you know where my uncle is, Mr. Grayson?” she asked. Maybe if she flirted with him she’d get some answers.

“Call me Wedge,” he said, a smile tugging at the corners of his lips. “And you are?”

Wedge? What kind of name was that? It didn’t sound Russian. Or European. Or come to think of it, like a real name at—

A blast of heat and afternoon sunlight speared into the bar as the door swung open, blinding Katy with its unexpected assault.

“A round of beers for everyone on me,” a laughing male voice called seconds before the door swung shut, throwing the bar back into murky shadows again.

Wedge Grayson muttered something in a language she didn’t understand.

Katy staggered back a step, her butt bumping against Merv’s knobby knee as she turned her attention from Wedge to the new arrival.

He strutted into the bar, grinning widely, his lean and yet at the same time muscular frame somehow loose and completely relaxed. Sandy blond hair hung around his head in a shaggy mess, complemented by an equally sandy stubble all over his jaw and chin. He moved with an arrogance that was both wickedly arousing and playful. He owned the space around him, dominated it even, despite Wedge standing taller than him. Hell, Mr. Beefy could sit on him and he’d almost disappear. But his sinewy body—on display thanks to the open shirt and low-slung faded jeans—said very clearly that if Mr. Beefy did sit on him, the bigger man would end up suffering all the pain.

A soft breath escaped Katy. The pit of her stomach fluttered. So did the girly bits between her thighs she hadn’t thought about since her uncle disappeared.

The newcomer continued to make his way to the bar. He hadn’t once looked at her but she couldn’t tear her stare from him. She didn’t need to look around to see the rest of the Longyard Pub customers were nowhere near as impressed with him as she was. Impressed? Insta-lust, more like it. Sheesh. The silence couldn’t be any more oppressive and aggressive.

The tattoo on his chest drew her eye. Symbols of some sort. Dots and lines in various tones of umber and rust-red, black, and white. It looked ancient. Spiritual. Was it tribal? Why did she want to trace the marks with her finger? Her tongue.

Tongue? Holy crap, what the hell was going on with—

“Seriously, Ipo.” The new arrival stopped at the bar on the other side of Merv, leaned on his elbows, and smiled at the barkeeper—who watched him with that same indifference Katy had witnessed earlier. “My shout. Everyone in here right now gets a beer from me.”