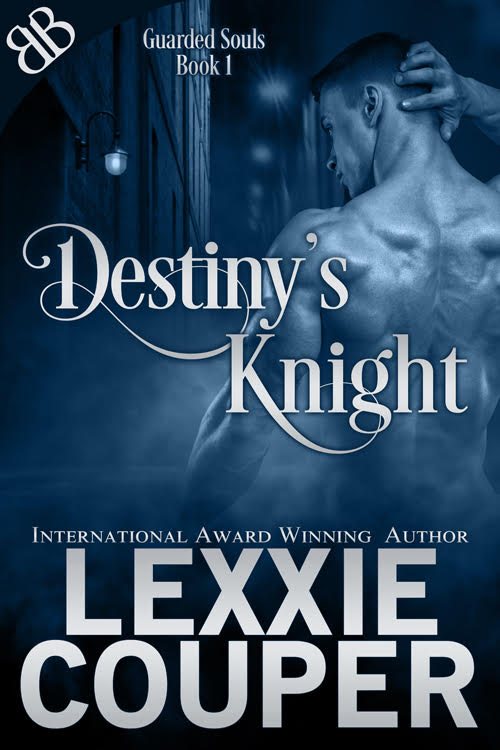 Playing the kick-ass demon slayer, Destiny, in the blockbuster TV show Destiny’s Knight is a dream come true for Billie Sheridan. It’s a surreal, exciting world and she loves every minute of it. Until her agent tells her an obsessed fan has escaped police custody and is heading her way. She needs protection. Now.

Nathanial Knight’s fall from heaven wasn’t planned. But no matter how he tried to deny the call of Billie Sheridan, he failed. Cast down, he conceals the fact he’s an angel by working for Guarded Souls Protection and Security, but when he learns of Billie’s stalker has sold his soul to the devil to have her, he moves. Fast.

“Just don’t open the door to anyone,” Adelaide repeated, stress eating into the instruction. “The cops are sending over a detail now. When they get there, I’ll let you know. Plus, I’ve arranged extra protection for you with—”

Billie jumped, dropping her phone in the process and letting out a little squeak her kick-ass character would have been completely embarrassed by.

“Billie?” her agent’s voice—tinny and faint—wafted up from the mattress.

Someone was at the front gate of her home, pressing the intercom button.

Billie stared through her bedroom’s open door at the darkness of her home beyond. A weak silver glow touched the edges and surfaces of her furniture, the moon outside barely penetrating her living room through the floor-to-ceiling glass doors that opened out onto the ocean-facing balcony.

She started, Adelaide’s distant voice like a scream in the silence.

The gate buzzer sawed at the darkness once more.

Snatching up her phone, she raised it to her ear. “There’s someone here.”

“Don’t open the door!” Adelaide damn near screeched. “The cops shouldn’t be there yet. Or the guy from the security agency.”

Billie stared into the gloom beyond her bedroom door. “But what if they are?”

“I…I don’t know,” Adelaide admitted, the confession becoming a wheezy cough. If Billie hadn’t been so on edge, she would have been gobsmacked. Adelaide Williams never admitted to not knowing something.

For a fifth time, her intercom buzzed. Loud. Long. Impatient.

“I’ll go see who it is,” Billie said, beginning to climb off her bed.

Billie paused on the edge of her bed. “My stalker’s name is Gilbert?” A giggling snort escaped her. “Well, that’s just a ridiculous name for a stalker.”

“Sorry.” Billie blushed. A lifetime of being raised by a strict Protestant mother had conditioned her to be shamed by admonishment.

Once again, the intercom buzzed.

“I’m going to answer it,” she announced, scrambling completely off the bed. Ignoring her robe, she hurried from her bedroom into the darkness of her home.

Billie had a moment to register her agent had resorted to using her full name, just like a mother would a naughty child in need of reprimand, before guilt made her aware of the panic in Adelaide’s voice.

But guilt wasn’t enough to stop her from hurrying to the intercom panel. If nothing else, she wanted to see what a stalker called Gilbert looked like—if it was indeed Gilbert pressing the button on the other side of her locked gate.

“It’s okay,” she muttered into her phone as she approached the entry foyer. “Whoever it is, they can’t get in. I’ve got a state-of-the-art security system, remember.”

The buzzer drowned out Adelaide’s response.

Heart thumping, she jabbed at the button beside the comm-link and activated the CCTV camera positioned above the security panel at her gate.

She had to see whoever it was before she said anything.

The small black screen in the control panel instantly filled with a full-color image of the man purporting to be from Guarded Souls Security and Protection.

A shiver ran up Billie’s spine, turning her nipples hard. Her lips parted in a soft gasp. The junction of her thighs throbbed.

He was tall. Tall and broad-shouldered and lean-hipped. The faded jeans and black leather jacket did nothing to hide how muscular, how exquisite his body was. Nor did the dark shaggy hair lessen the impact of his square jaw and hawkish nose and incredible lips.

Good gravy, the guy was gorgeous.

And looking right at you.

He was. It was as if he knew she was looking at the screen at that very second. Piercing gray eyes connected with hers through the video feed, which Billie knew was absolutely ridiculous. He couldn’t see her. He had no idea where she was looking, nor even that she’d activated the CCTV camera, but despite that, he was looking at her. Into her soul. Seeing her…

Billie jerked her finger from the control panel and took a step backward, her stare fixed on the now black screen.

Silence wrapped around her, thick and heavy.

Was he still looking at her? Through the inactive camera?

The almost imperceptible cry of her name made Billie gasp again. Realization hit her, and, face flooding with heat, she rammed her cellphone to her ear.

“Adelaide, what’s Gilbert look like?” she asked, studying the control panel of her security system and its black screen. She could feel the man outside her gate watching her through the camera. Surely it had to be her mind playing tricks on her? Damn it, her pulse and heart were competing for the title of fastest beating thing in her body.

“Short, five-six at the most,” Adelaide answered. “Bit fleshy. Got a paunch. Receding hairline.”

“So,” Billie said, her heart and pulse increasing in speed, “not six-foot plus and completely gorgeous?”

Adelaide barked out a dry laugh. “Not even close.”

Jabbing her finger onto the intercom button, Billie leaned closer to the microphone. “Yes?”

“Ms. Sheridan?” the man’s deep voice rumbled through the speaker. The kind of voice her acting coach would describe as “panty-creaming”.

“Who is this?” Billie asked, utilizing her Destiny voice—the one her character used when facing down malevolent demons and vampires.

“Nathanial Knight, Ms. Sheridan,” the man with the panty-creaming voice outside her gate answered. “From Guarded Souls Security and Protection agency.”

A little lick of heat traced its way through the pit of Billie’s stomach at the way he pronounced her name. Followed by a finger of unease as her brain processed what he’d said.

She pressed the intercom button again. “Did you say Knight?”

A low chortle came as an answer. It was just as deliciously sexy as his voice. Oh God, if it really was Gilbert outside trying to fool her, she was going to have a hard time being freaked out by him with a voice and laugh like that.

“Yes, Ms. Sheridan. And yes, I recognize the absurd coincidence of a security expert called Knight coming to the rescue of the star of Destiny’s Knight.”