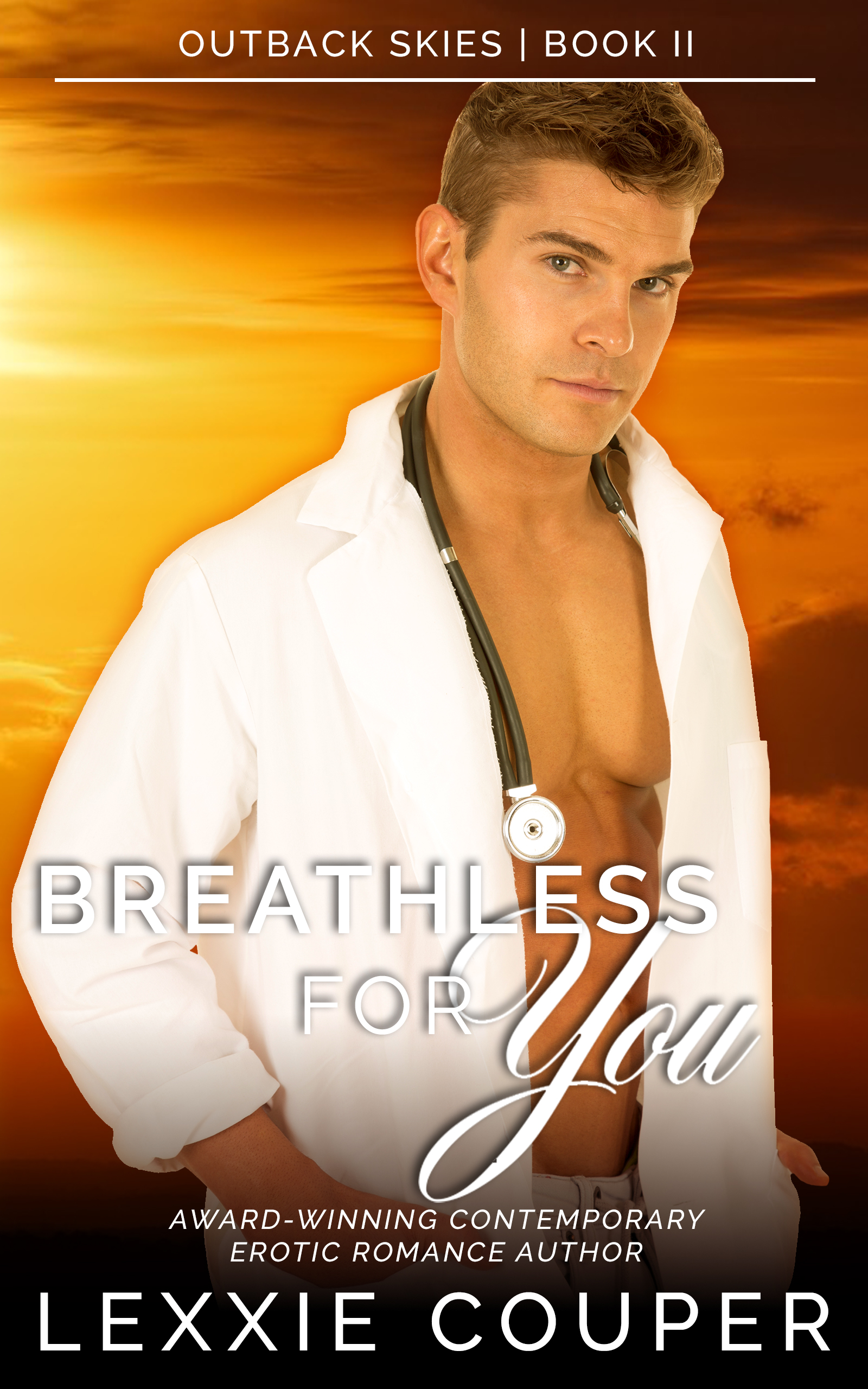 The middle of the Aussie outback seems the perfect place for city-bred Dr. Matt Corvin to regroup after the beating life gave him. Now a member of the Royal Flying Doctors service based at Wallaby Ridge, Matt’s heart is well on its way to a full recovery…until his new pilot arrives. Natacha Freeman rekindles in him a desire for something he thought he’d never want again—connection.

Flying a medical plane in the vast emptiness of the outback wasn’t how Tash saw her life unfolding. She was going to be a fighter pilot, damn it, until her lungs betrayed her during a medical exam. Now she’s stuck every day in a tiny plane with an incredible guy who makes her wonder if she’s exactly where she’s meant to be.

Sometimes taking a deep breath is the hardest start…

The mantra wasn’t helping Tash at all. Nor was the fact the doc was looking sexier than freaking ever. Which wasn’t really possible, given only two hours had passed since they’d touched down from the Bourkenback cattle station call-out and this one. But he was. In those short two hours, he’d somehow grown more of a five o’clock shadow, his hair had become scruffier, the jagged scar running from his forehead down his temple to his cheekbone had become whiter in his tanned face and his shoulders had somehow become broader. Impossible.

It didn’t help that he was now doing what he did better than any doctor she’d ever known. He had an uncanny ability to make a person in serious pain forget all about the agony wracking their body with his amazing, relaxed and totally natural bedside manner.

She stood at the side of Reg McGuire’s bed, octogenarian’s wife clinging to her hand like a lifeline, and watched Matt do his thing.

God, why couldn’t he be a fat, chain-smoking, alcoholic doctor like the one who’d shattered her fighter-pilot dreams? That way, she’d have a better chance of hating him.

If she hated him, good doctor or not, drop-dead gorgeous or not, sexy scar or not, she wouldn’t spend every day wishing—deep down in the most selfish centre of her soul—for emergencies that would require them to be together.

She truly was pathetic.

What would her parents think of her now?

At the unexpected thought of her estranged parents, a tight ribbon of cold pain unfurled through Tash.

A hot blush flooded her cheeks.

Great. Another reason to despise the doc—he made her forget where she was and what she was doing.

“Thank you so much, Dr. Corvin,” Beryl McGuire gushed, enveloping him in a hug as he straightened beside Reg’s bed. At her feet, the five pet dingoes responsible for Reg’s nickname whimpered with joy, as if aware Matt had saved their owner. “I told Reggie he shouldn’t get up onta the roof. He falls over on flat ground. But he didn’t listen ta me. Maybe now he will.”

Matt’s gaze met Tash’s. A smile shone in his blue eyes, far more…intimate than any he’d given her before. A connection.

For a moment, her chest tightened. Her heart beat faster. A dry cough escaped her, soft and sharp at once.

And then Matt was disengaging himself from Beryl’s enthusiastic embrace, his warm smile for her. “Maybe he will.” He turned to Old Man Dingo, currently flat on his back on the bed, head bandaged, right ankle resting on two pillows. “Do you hear me, Reg? You were lucky you only dislocated your hip. Next time you decide to fall from a roof, Tash here might not be in the mood to fly me out to help it pop back in, understand?”

Reg chuckled, the good-humored sound lost to a wince a second later. “If it means I’m going to see Miss Freeman,” he said, even as he reached out for his wife’s fingers with a wobbly hand, “I’m going to fall off a roof every day. Have you seen the way her butt looks in her jeans, Doc?”

Fresh heat filled Tash’s cheeks. Unable to stop herself, she flicked a look at Matt.

Just in time to see him slide his gaze away from her, his smile fading.

“Yeah, yeah,” Beryl harrumphed at her husband, rolling her eyes as she patted his hand. “We all know you’re a dirty old man, Dingo. Now thank Dr. Corvin so he can take off with Miss Freeman and leave me alone with you.”

“Oh, are you going to get dirty with me, darl?” Reg chuckled, beaming up at his wife. A warm glow filled Tash’s heart at the open love in his face. She’d never seen her parents look at each other that way. What would it be like to be the recipient of such honest affection?

Unable to stop herself, she flicked a look at Matt. And caught her breath when their eyes connected for a heartbeat.

“And that’s our cue,” he burst out, jerking his stare away. He bent at the waist and retrieved his doctor’s bag from the floor, the move pulling his rolled sleeve farther up his arm to reveal the knotted scare running the length of his inner forearm. Damn it, she even found that scar sexy on him. What was wrong with her? “Tash, you want to fire up the plane so we can leave these two deviants alone? Reg, you keep your libido in check until I say so. No roof climbing or getting dirty, you hear?”

“Spoil sport,” the elderly man grumbled, his gnarled fingers threaded through his wife’s.

Tash ducked her head with a smile, another dry cough catching in her chest. The old geezer may be stupid for trying to fix his wool shed’s roof, what with a crew of cowboys and hired hands working on his cattle station, but that didn’t stop him being adorable.

“Okay, Tash,” Matt said, giving her a very platonic smile. The type of smile he’d been affording her for the last six weeks, even when he delivered her coffee—hot, black and loaded with sugar, just the way she liked it—on every damn callout. Nothing like his earlier sizzling connection. Or even his furtive glance just now. “Let’s go.”

A prickle of irritation shot up her spine, not just at the thought of all those unexpected coffees and their strangely unsettling effect on her, but at his words. She wanted to point out that as the pilot, she was the one who decided when they took off. She also wanted to ask him why he insisted on being so damn sexy. Instead, she gave him a nod, gave Beryl a soft smile and then turned one on Old Man Dingo.

“If you promise not to climb anymore roofs,” she said, “I promise to come back next week in the tightest jeans I own. Deal?”

Tash dropped him a wink and then, without looking at Matt, exited the McGuire’s bedroom. Better not to look at the good doctor in case she saw that same intimate heat in his eyes again. If she did, she might do something stupid like actually let him know she liked him.

Huh. Like? Lust is more accurate. Long for, desire, ache for…oh my God, woman, stop it!