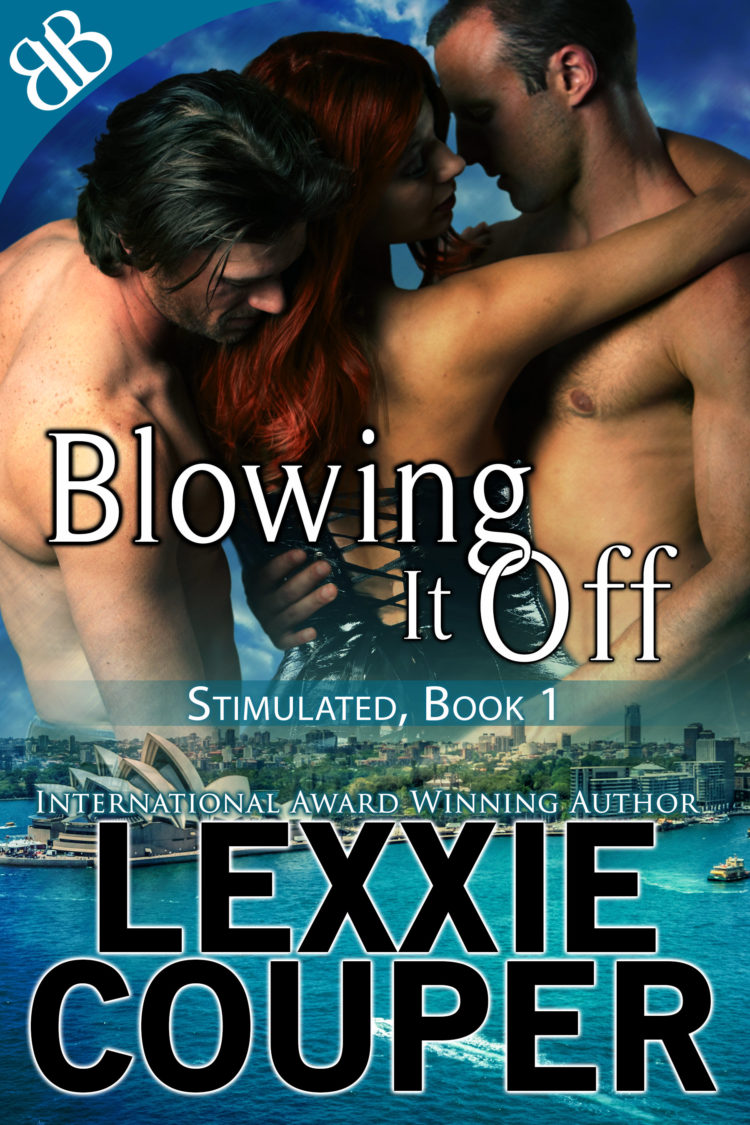 Things are going to get hot…

Blowing It Off, by award winning author Lexxie Couper, Book 1 of her Stimulated series, takes you on an exciting journey of mystery, humor, and desire. Two sexy Australian arson investigators light the fires of passion in this contemporary menage romance.

A suspicious fire has destroyed the studio of glassblower Phoebe Masters. And she knows what that means – a visit from the region’s best arson investigators. The two men who reduced her heart to cinders. Men she’d hoped never to see again.

One wild weekend with Phoebe overwhelmed Will Bradley and Damon Hunt. Like morons, they blew if off, burning any chance for a triad romance with the talented beauty. The investigation gets them back in her life, but now they have to prove the three of them were meant to be together. Their strategy? A body-blazing inferno none of them will ever be able to extinguish.

But will the small town of Morpeth survive their desire? And more to the point, will Phoebe?

Content Notes: This novella contains two hot Australian men who may very well make you want to fly to Australia to experience you own sensual ménage romance. Cost of airline ticket not included with purchase. Blowing It Off is intended for mature audiences.

“You know they’re going to call the big guys in for this, don’t you?”

Sliding her fingers over the smooth, solid length gripped firmly in her left hand, Phoebe Masters flicked a sideward glance at the tall streak of stunning blondeness beside her and bit back a sigh. “I don’t want the big guys.”

The blonde—a.k.a. Sami Charlton, a.k.a. BFE (Best Friend Extraordinaire), a.k.a. Australia’s most successful female motocross rider—let out a chuckle. “I don’t think you’ll have a choice, Pheebster. Your studio’s been gutted. With a fire this bad you know they’re going to call in the investigation team. If Dad was alive he’d tell you the same thing.”

Phoebe’s stomach lurched and she ground her teeth. Damn it, when she’d upped and moved from Newcastle to the utterly parochial, completely charming historical village of Morpeth six months ago, she’d planned to never see the investigation team again.

“And I don’t believe for a second that you don’t want to see them.”

Sami’s calm statement made Phoebe’s pulse pound just a little harder in her neck. She bit back another sigh. Here she was, standing in the smoking, charred remains of what was once her studio, the place she spent every day blowing molten glass into artworks of stunning beauty, with the acrid, wholly jarring stench of scorched wood and wet timber stinging her sinuses with every breath. Reminding her with no uncertainty that everything she held dear and valuable was destroyed—and she was thinking about Damon Hunt and William Bradley.

“The investigation team from Newcastle,” Sami said to the elderly man now standing on Phoebe’s left. “This has to be arson. There’s no other explanation for such an accelerated burn of materials designed to withstand high temperatures, don’t you think?”

The old bloke’s wiry salt-and-pepper eyebrows rose up his creased forehead and he tugged at his somewhat scruffy firefighter’s uniform with calloused hands. “And what would you be knowin’ about arson and accelerated burn, missy?”

Phoebe let out the sigh she’d been holding back for the last five minutes or so. “Captain Kilgour,” she placed her fingers lightly on the prickly old firefighter’s arm, “this is my best friend, Sami. Sami’s dad was the commander of the Newcastle District Fire Investigation Unit.” She turned and gave Sami a pointed look. “Sami, this is Keith Kilgour, the captain of Morpeth’s fire brigade.”

Kilgour squinted at Sami. “Was?”

Phoebe knew her best friend wasn’t going to expand on her answer. The death of her father in a house fire still hurt Sami deeply.

Kilgour’s eyes narrowed even further before he returned his attention to Phoebe. “Well, much as I hate the idea of those upstart buggers from the city coming here and tellin’ me my business, the young missy is right. There’s somethin’ about the feel of the place I don’t like.” He sucked in his checks and smacked his lips. “It tastes wrong.”

Phoebe frowned, ignoring the fluttering little knot in her belly at the “upstart buggers from the city” coming anywhere near her. “So what you’re telling me,” she grumbled, crossing her arms over her breasts, “is I can’t start cleaning up until the investigation team—”

Phoebe gave her a scowl. Damn, she was one for providing details today. “Until the Newcastle team come up and—”

“Work their magic,” Sami finished for her, a grin playing with the corners of her lip-glossed mouth.

Phoebe scowled harder. Were it not for Captain Kilgour standing beside them, Sami would be finding herself the recipient of a bloody good punch to the arm. Work their magic? Under no circumstances were Will Bradley and Damon Hunt working any kind of magic on her again. Ever.

“That’s right, Ms. Masters,” Captain Kilgour agreed, giving Phoebe what she suspected was supposed to be a reassuring smile. “The Newcastle boys will need to take a look at this before you can touch it.”

Phoebe let out a shaky sigh. Damn it.