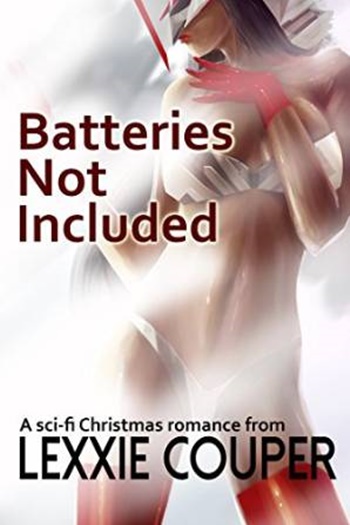 This Christmas present gives a whole new meaning to the term “bringing joy to the holiday season”.

Dr. Darian Black is Playtime Industries’ brilliant A.I. engineer and the creator of the Orgasmatron 6000, an “adult entertainment” android of incomparable beauty and skill. Incredibly intelligent and arrogant, Black is long overdue for a lesson in humility.

Kiana is his perfect creation. She is beautiful, insatiable…and malfunctioning.

And then there is 6-E, Dr. Black’s personal computer. “She” is sentient, as intelligent as he is…and very very angry with him.

When Kiana goes in search of the ultimate orgasm the city isn’t safe. Because if she experiences a multiple orgasm she will detonate –- and take a large chunk of the city with her. Only one person can stop her, and Dr. Black’s computer isn’t playing ball. At all.

Christmas is a time for miracles. Just hope that Santa’s on his way.

Author Note: This holiday short story is full of cheeky and sexy sci-fi futuristic adventure suitable for mature audience only.

Kendric stared at the naked female form lying on the floor at his feet. She was perfect. Perfect perky round breasts, perfect full pouty lips, perfectly tousled honey-blonde hair.

He kicked at the closest piece of plexi-wrap near his foot, a scowl on his face. “Fucking ‘Batteries Not Included’ crap!”

The female sex-bot—the Orgasmatron 6000, Playtime Industries’ latest and greatest creation—lay motionless. Why hadn’t the git who sold the damn thing to him told him she needed a power supply? Too goddamn busy proclaiming to be Santa Claus’s nephew, that’s why.

He kicked another discarded sheet of packaging across the room. His girlfriend was just thirty minutes away and what was the state of her Christmas present? He glared down at the inert sex-bot. Fucking useless, that’s what!

He dragged in a deep breath. “Calm down, Ken. Calm down. There’s got to be something that’ll work around here somewhere. Some other kind of power source…” He looked frantically around the room. Nothing. The realisation of his wildest fantasy—a thoroughly hot and thoroughly filthy threesome—was but thirty minutes away and it was going to not fucking happen because the stupid Orgasmatron 6000 didn’t come with fucking batteries! “Shit!” he shouted. Shit, shit, shit!

He slumped to the floor, flicking at one of the most perfect nipples he’d ever seen. Closing his eyes, he pictured his girlfriend tracing the firm, rosy tip with her tongue, taking it into her mouth. A low groan rumbled in his throat. Krissy had great lips, soft and full and totally kissable; just thinking about them closing around the sex-bots nipples made his cock come to podgy life in his pants. He squirmed, rubbing his balls against the floor, picturing her climbing atop of the bot, parting the 6000’s perfect thighs and licking at the perfect pussy as the bot returned the favour in kind.

He scurried around the room, shoving stuff left, right and centre, opening and closing drawers, looking in cupboards, under the icebox—

His eyes fell on Krissy’s hyper-scooter.

Leaping across the room, he flung open the balcony door and pushed over his girlfriend’s scooter, ignoring the jarring scrape of the dual hover jets hitting the tiles. Without hesitation, he reached under the scooter’s power cell doors, grabbed the battery gel-pak and yanked it out. In two steps he vaulted the lounge, was on the bot flipping it over accessing the battery compartment in its ass and ramming the gel pak in. “Yes!”

“Just what the hell is going on?”

Kendric spun around, hand still firmly shoved up the 6000’s ass. Krissy stood in the door to their apartment, a stunned expression on her face. He gave her a sheepish smile. “Hi, honey. Happy Christmas.”

What do you do while you’re waiting for your dau

There are some people who come into your life, eve

Visiting my mum in Tamworth for a night. (We went

Had huge plans for Saturday. And then everything w

I drew my goldfish. It’s a work in progress. #c