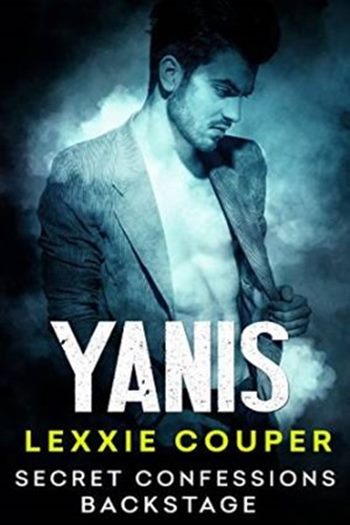 An all-access pass to Sex, Love, and Rock ‘N Roll. Because what happens on tour doesn’t always stay on tour…

From Australia to the world…

Chicago. The last stop of their wildly successful US tour sees Australia’s biggest rock band, The Screaming Tuesdays, in sultry, summertime Chicago to play two sold-out shows. But the stage is not where the action is, and no one knows what goes on behind the scenes…

Never send a woman to do a man’s job. Yanis Drakos lives for his job, and nothing and no one will get in the way of what he wants. Especially not Carson Swift, the dominant, officious, distracting, alluring, entirely too enticing tour manager who clearly needs to learn a lesson about who’s in charge.

“What the hell do you think you’re doing?”

At the question—uttered in a calm, modulated tone bordering on humoured—Carson Swift looked up from her iPad and the over-crowded calendar page on its screen.

“I’m playing Angry Birds,” she answered with a curl of her lips to the man standing in the doorway of her Chicago office. “What are you doing?”

Yanis Drakos regarded her with a dark gaze as calm as his voice. As unperturbed as his expression was, however, as poised as his body language, the Australian was pissed. She could see it in the slight knotting of his jaw muscles.

Without waiting for an invitation, he crossed to her desk, his immaculately cut, charcoal-grey Hugo Boss suit doing exactly what he knew it did: make him look like a man completely in control of every facet of his life.

Carson ran her gaze over him, taking in the slick blackness of his short hair, the Mediterranean brown of his skin, the defined fullness of his lips, the broad expanse of his shoulders…and lower.

“There’s nothing,” she went on, letting her inspection linger below his waist for an obvious beat before returning her focus to his midnight-black eyes, “as enjoyable as knocking an arrogant creature off his pedestal.”

Yanis’s nostrils flared. “Nothing?” He slipped open the button of his jacket and lowered himself into the chair opposite Carson’s desk, resting his right ankle on his left knee. “I fear there are things in your life you are doing wrong, Ms Swift. Or…things being done poorly to you.”

The innuendo behind his statement wasn’t lost on her. Nor was the sheer magnetism of his presence. Not for the first time, Carson acknowledged the man was unlike any band manager she’d dealt with.

Also not for the first time, she acknowledged he was the walking embodiment of sexy male arrogance. The epitome of the Alpha male as defined by all those trashy romance novels she’d read as a deluded teenager.

In her line of work as a tour agent for damn near every A-list performer in the U.S. she met a lot of conceited sex-god Alpha males. Yanis Drakos made them all look like awkward adolescent boys. Sexier than a man had a right to be, and so sure every thought he had, every word he uttered, was important. He’d argued with her every step of the way organising the US leg of The Screaming Tuesdays’ world tour. Every venue she suggested, he counter suggested. Every marketing plan, every promotional graphic, every goddamn city, he questioned her. Flustered her. Got under her skin to the point where she spent long hours at night pacing her bedroom, or hotel room, or office, picturing his smug face over and over and wanting to smack it. Picturing his perfectly combed hair and wanting to mess it up. Picturing his precisely knotted tie and wanted to tug it askew.

It was no wonder she enjoyed irritating him so much. Ruffling his feathers. Sexier than sin or not, he wasn’t the end all and be all of mankind. She was no longer the deluded teenager who swooned over smug Alpha males after all.

“Explain to me,” Yanis fixed his gaze directly on her, “why you’ve arranged for the boys to appear at a shopping centre tomorrow morning?”

Carson had yet to work out why, but in the last four months—from the first day he contacted her regarding his band’s US tour, to today, with The Screaming Tuesdays in Chicago, the final stop of their sold-out tour—she enjoyed pointing out the difference between Australian and American speech. Perhaps she did it to highlight he wasn’t on his home turf now. She’d discovered during her research into him (something she did the night after their first correspondence) that Yanis was a force to be reckoned with in Australia. If a band had a chance of success, Yanis Drakos had a hand in their direction. If you didn’t toe Yanis’s line, no matter how talented you were, you sank into obscurity.

Whenever she corrected his Australian speech—lift/elevator, bill/check, chips/fries, arse/ass—it ruffled him. And Yanis Drakos, to Carson’s observation so far, rarely ruffled.

“Why,” he said, voice deep and somehow menacing in its composure, “have you booked the boys to make an appearance at a shopping centre tomorrow?”

Carson smiled. Oh yes, he was ruffled this evening. Putting her iPad to sleep, she placed the tablet aside, rested her elbows on her desk and leant forward. A little. “Because I can.”

Those dark eyes of his flicked to her cleavage for a split second—an instinctual male response to such an opportunity.

It had been a deliberate move on Carson’s behalf. A dirty tactic. She had incredible breasts, not too large, but unaffected by gravity and age. The soft silk of her sleeveless shirt revealed just a hint of them and the lace bra she wore with teasing perfection when she positioned herself in such a way. She’d worn it tonight knowing he would confront her in person over his band’s mall appearance. Along with a pencil skirt that hugged her never-ending thighs and had a split up the back high enough to reveal just a flash of the lacy tops of her stockings. Another dirty tactic for when she inevitably walked him out of her office.

The brief caress of Yanis’s eyes on her cleavage, however, sent something unexpected through Carson.

He cocked an eyebrow, his stare holding her prisoner. “And you didn’t think to check with me first?”

Carson let her lips curl, even as she tried to process the disquieting fact she wanted him to check out her breasts again. “Why would I? My job is to oversee The Tuesdays’ tour here in the States. After Jet told Jimmy Fallon on live television three nights ago he looked forward to checking out Chicago’s Water Tower Place and invited anyone who saw him there to come up and say g’day—his words, Drakos, not mine—it became a necessity for the band to appear at the shopping mall. Their appearance is now part of their tour. Your job is to make sure they have their pocket money before they venture beyond the over-protective blanket you wrap them in, to school them in what to say on live television if you don’t want them straying beyond it, and to ensure they arrive at rehearsals on time. Something, I’d like to point out, you failed at in Los Angeles.”

Yanis didn’t move. Not for a heartbeat. Long enough for the disquieting side of Carson to note just how chiselled his jaw was, how strong the column of his throat. And then, much to her unexpected dismay, he smiled.

She wished he hadn’t. It detonated a tight pulse in her sex. An interested pulse.

In the few times they’d actually been face-to-face, she’d never seen him smile. In person he was like his emails, texts and telephone conversations: blunt, self-assured and serious.

In no way could this smile be called friendly. It was the smile of a predator, but holy fucking God, was it sexy.

“Ah, yes. My job.” His smile grew wider. Reached his eyes with a gleam Carson had no hope of interpreting. Without another word, he rose to his feet, the action smooth and confident. So confident.

So much for him being ruffled.

How can he be like this? You unsettled him with your cleavage, highlighted his incompetence. How can he be so…so…sure of himself? So goddamn…sexy?

Still silent, he walked for her office door.

Before Carson could stop herself, she ran her gaze over his back and down to his ass. The suit jacket hid its shape, but she had little doubt it would be as exquisitely male as the rest of him. A man like Yanis Drakos didn’t allow his butt to become flabby or saggy. It would be tight. Very tight. Would it also be as brown as the rest of his skin? Or a shade lighter? Would she find the vestiges of sunlight-formed swim trunks if she were to relieve him of his clothes? Or would that smooth tan extend over his entire, naked—

Jesus, Carson. What are you doing?

“So I take it,” she said, pressing her thighs together at the hot throb blooming in her pussy, “you’re going to get back to your job and let me do mine?”

He reached the door and, without a word, locked it.

At nine-thirty pm, her assistant had long gone for the day. It was just her and Yanis. No one else.

At the realisation, a wicked ribbon of something hungry unfurled through Carson. Hungry and eager and excited.

Stop it. Even if he does turn you on, you can’t…

Turning on his heel, Yanis fixed her with a dark inspection. One that lowered to her cleavage again, lingering longer this time.

Carson’s heart skipped up into her throat. Her nipples pebbled. Strained against the lace of her bra and the soft silk of her shirt.

At the slight flaring of Yanis’s nostrils, she knew he’d noticed. Noticed and interpreted it to mean—

“I’m not impressed by you, Drakos,” she declared, doing her best to force her voice steady. “Nor scared. You’re not making me tremble.”

He chuckled, a low, throaty sound that detonated another unexpected throb in the junction of her thighs. “I beg to differ, Ms Swift. I think I do make you tremble. Tell me, how many nights have you spent thinking of me?”