Beware! Contains an alpha-male wolf shifter, a kick-ass feisty heroine, and desire and lust darker than the depths of space.

The Boundaries: Part One

Boundary Guardian Zeric Arctos knows trouble when he sees it – and Raavelian sex-slave Jaienna Ti screams all sorts of trouble. Tracking a nefarious Bliss dealer, Zeric must stay focused on the job, something almost impossible to do with Jaienna in his midst. To make matters worse, the seductive Raavelian brings out the ‘animal’ in him – an ancient blood curse he has struggled to control his whole life. The beast now threatens to consume him and Jaienna’s intoxicating kisses makes the primitive call so much harder to resist.

Jaienna Ti is out for revenge. And she’ll stop at nothing to achieve it. Posing as a sex-slave isn’t the worst thing she’s done – she is, after all an Intel-Patrol Corp termination agent, albeit a rogue one – but it’s definitely one of the more interesting roles she’s assumed. And it gets even more interesting when Zeric Arctos ‘rescues’ her. Surely being an intergalactic sexual assassin has to come with some perks, right? 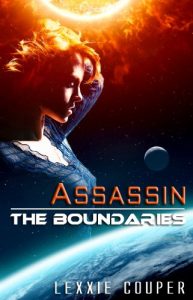