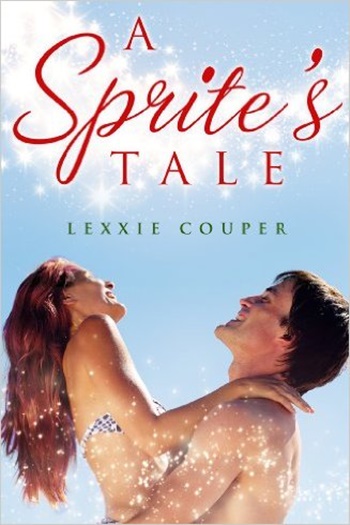 When an Aussie bushland sprite collides with Santa’s nephew on a sunny, isolated Australian beach, the sand won’t be the only thing that scorches!

Having decided his uncle is due for a break, Santa’s nephew, Nick, takes on the job of delivering presents and heads straight for the sun-drenched beaches of Australia. After a cataclysmic sleigh disaster with a low-flying Qantas airbus, Nick finds himself rounding up reindeer on an isolated coastal stretch. When all seems lost — including Rudolph — Nick stumbles upon Chrissie, a woman just as mysterious as he.

Chrissie is an Australian bushland sprite, sent after Nick by his uncle. Santa has made his own decision — it’s time for his nephew to settle down, and Chrissie’s just the sprite to fill his empty heart.

Christmas is always hot in Australia, but this year, things are really heating up!

The rumbling in my gut hit me before the jet did. Well, before the jet’s turbulence did. One second I was skimming through the sky, the cool wind on my face, the next my gut feels like the San Andreas Fault having a bad day. I toss a look over my shoulder, see the Qantas Airbus and think, oh shit.

Ten seconds later, I’m in a wild spin, heading straight down; sleigh, sack of presents, eight reindeer — plus that red-nosed ninth wheel, Rudolph — and all. Not the perfect situation, I have to say. No wonder my uncle is a jumpy mess come Christmas Eve.

Ever plummeted through a high-altitude cloudbank while trying to regain control of a sleigh chock-full of presents? It ain’t easy, especially when said cloudbank makes you blink like mad and you’ve left your sunglasses back in your uncle’s workshop at the North Pole, damn it.

Especially when Rudolph’s nose is flashing like an insane traffic signal, Blitzen is trying to pull right, Donner is trying to pull left and Comet looks like he’s two seconds away from throwing up. Trust me, reindeer vomit is not easy to get out of denim.

Scrambling for both the wildly flailing reins and the gyro leveler on the sleigh’s control panel, I flicked a quick — and I have to admit, worried — look at the rapidly approaching terrain coming up to meet me. Or rather, the wide stretch of completely isolated beach I was rapidly approaching. If I didn’t get some semblance of control back, my uncle was going to be down one nephew, his only nephew, and a lot of kids were going to wake up Christmas Day sans presents under the tree.

This wasn’t good. So much for a dream run to warmer skies to give the old man a break.

Snatching the lashing reins — just — I yanked on the strip of leather. It always cracks me up that my uncle’s sleigh is decked out in technology way beyond human comprehension but he insists on retaining reins to steer the thing. Come to think of it, he probably doesn’t need the four-legged fur-covered propulsion units either, but Santa’s always been a fan of tradition so…

All right, all right, I hear you. Enough of the back story, Nick. Get back to the situation, already.

So, I’m heading for a deserted beach somewhere — I think on the far north coast of Australia — wrestling madly with a set of reins that feel more like a live snake. The beach is getting closer, the night air is getting hotter, I’m sweating and it has nothing to do with the tropical summer’s heat.

The reindeer are frantically pawing at the sky desperate for traction, that bloody nose of Rudolph’s is flashing like crazy (who knew it acted as a hazard signal as well?), Dasher’s throwing me surly looks, the moonbeam-bathed beach is about to turn us all into flapjacks, I’m close to popping my shoulder-joints yanking on the reins…and we pull out of the spin. Not entirely, but enough. Thank the Christmas Spirit for that.

We hit the beach. Hard.

Reindeer tumble and roll everywhere, antlers clack, clatter and crack, reins snap, the sleigh smashes into the surf-compacted sand, bounces once, twice, smashes down again, and I’m flying through the air in a wild arc, flung from the carriage like one of my uncle’s expertly made rag dolls.

Guess I should have been wearing my seat belt, huh?

Maybe I should introduce myself before I go on. Nick Saint Nicholas. The one and only Saint Nicholas’s one and only nephew. I do the odd Christmas miracle for my uncle when he’s pressed for time. It’s been a mad year this year and I wanted to give the old man a vacation — he’s never taken one, not even during the mid-2020s when the UN declared him a potential terrorist target and banned Christmas for three years. ‘Christmas without Santa may as well herald the end of humanity’ I heard him grumble moments before shooting into the skies on a covert present drop.

No, the old man needed some time out, and what’s family for if not to help when the going gets tough? So I hijacked the sleigh and took off from the Pole before he finished buckling that thick black belt of his around his waist. And then — about four hours into the delivery process — the Qantas airbus happened to cross my flight plan. So much for good intentions.

What the hell was I to do now?